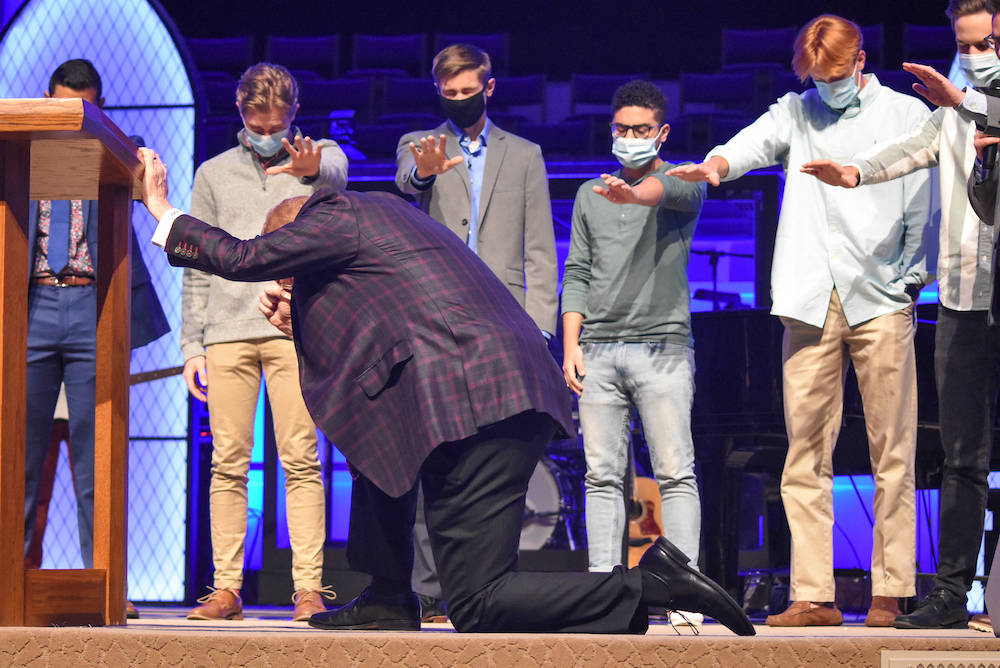 Pictured Above: The young men and future pastors who Pastor Ted Traylor regularly mentors share a special time of praying for him during his 30th Anniversary Celebration held Nov. 1.

PENSACOLA –During Ted Traylor’s 30 years as pastor of Olive Baptist Church in Pensacola, his leadership has not only impacted the world, but generations to come as he mentors the next generation who feel the Lord calling them to ministry.

Twice a month, the pastor meets with 11 young Olive members to disciple them toward leadership. At these meetings, he holds a discussion–sharing wisdom from his own past and present–then allows them to ask questions. The young leaders being mentored have noticed qualities in Traylor that set him apart.

“Pastor Ted possesses rare traits such as compassion, integrity, authenticity and a skilled ability in communication,” said Sam Harris. “These God-given components make him a solid leader, but the greatest trait he possesses is submission to the Lord Almighty. He knows that the best way is God’s way and because he has lived this way for many years, in spirit and truth, he can teach us young men with such insight.”

As for Traylor, much of what he does he learned from his own mentor, Lionel Patton, when the Pensacola pastor began feeling the tug to ministry. Patton was pastor of Pisgah Baptist Church in Alabama where Traylor was licensed to preach in 1971 and ordained in 1975.

“He talked to me about preaching, allowed me to use his library and recommended books to read,” Traylor said. “He was an honest encourager to me. The line I remember from him more than any other was ‘A call to preach is a call to prepare.’”

Traylor has a clear vision why mentorship is so important when raising up strong leaders. He pours into their lives knowing that is crucial for their development.

“At Olive, young men answering God’s call find themselves in a large church where they may not be close to the pastor. Making certain there is a relationship is vital. That is the reason for our Sunday evening gatherings. The relationship leads to instruction and open dialogue about ministry,” Traylor said.

Tim Hunter, another one in the discipling group, is in his final year of his undergraduate studies focused on pastoral ministries. He currently serves at Olive as a pastoral resident, meaning he is being shaped with the end goal of being sent out to pastor a church.

Hunter emphasized that the past year’s training under Traylor has been vital to his preparation to pastor. He very much looks forward to the bi-monthly meetings.

“During this time, Dr. Traylor has made it a habit to allow us to ask him whatever questions we may have about life or ministry and has also made it a habit to pray with us and impart his passion for revival to us. These times with him have been extremely formative,” Hunter explained.

Traylor also takes those he mentors to conferences and revivals he preaches so they can see what pastoring looks like firsthand.

Hunter explained, “Both seeing Him plead with God’s people from the pulpit to cry out to God on their knees in prayer, and then actually being on my knees next to Him in prayer personally have both been very formative when I consider the way I want to pray both publicly and privately.”

By sharing such transparency with the Olive pastor’s public and personal life, the men have been able to see that their pastor practices what he preaches and truly cares for the people around him.

“It’s such a humbling honor to be with a group of God-fearing young men being led by a Godly pastor who lives out his teachings,” Harris concluded.