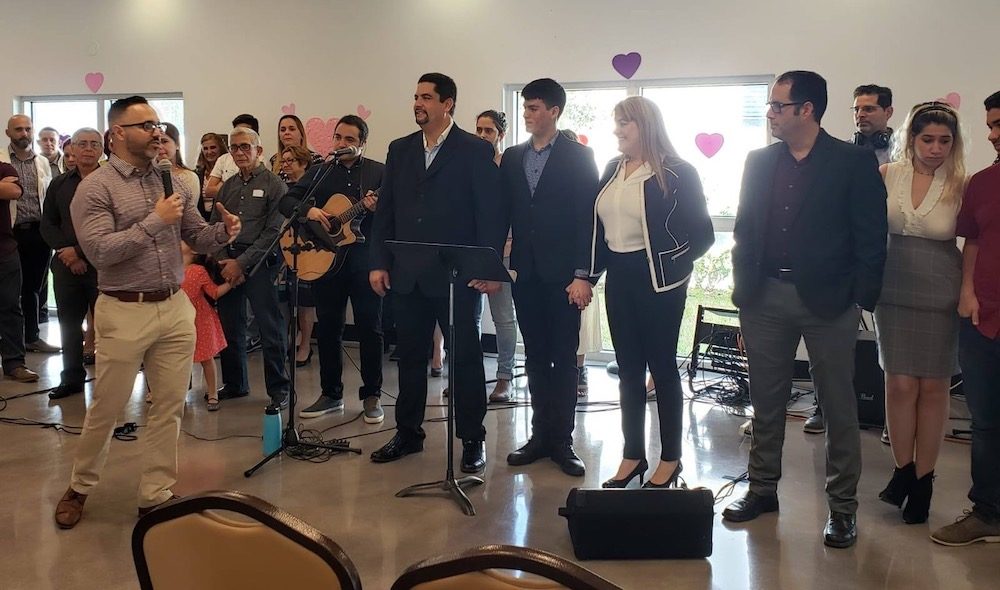 MIAMI—Iglesia Alcance Miami launched its church Jan. 20 with 153 in attendance at the Pinecrest North Preparatory academy in south Miami. On that same day, The Pulse Miami church had its launch service at their new location–in the same building. 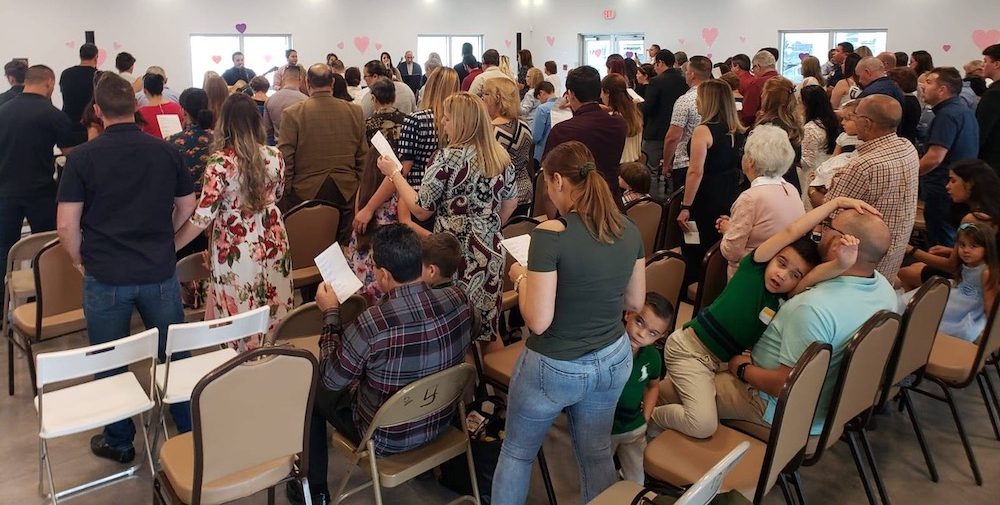 The new churches—one Spanish-speaking and the other English-speaking–had not planned to plant their services simultaneously, according to Todd Peterson, pastor of The Pulse, and Samuel Miranda, pastor of Alcance.

In fact, they didn’t know about each other until just days before their launch.

“It was a God thing,” Peterson said. “We were setting up for our Sunday service at the school when we came across a group that was praying,” he said. “I approached them and asked them to pray for us because we would be launching there on Sunday and they said, ‘so are we.’”

Before meeting Miranda, Peterson had approached Al Fernandez, Florida Baptist Convention’s southeast region catalyst, about opportunities to partner with a ministry to reach the primarily Hispanic Fontainebleau neighborhood in south Miami, where the school is located.

“There is a huge need in Miami for churches to reach their community with the Gospel of Jesus Christ bilingually,” said Fernandez. “One of the easiest ways of accomplishing this is to partner with a like-minded church that ministers in a completely different language.

“Unbeknownst to them, it is evident that God brought together two Florida Baptist Convention churches to reach the Fontainebleau community. Both pastors now see the huge advantages of cooperating and collaborating to reach this diverse community,” said Fernandez.

“This is definitely a win-win situation for not only Iglesia Alcance Miami and The Pulse Church, but more importantly for the cause of Christ in this area of Miami-Dade County.”

“We are focused on Hispanic ministry,” said Miranda, “and we would be complemented well by the Pulse” which is targeting the English-speaking community.

“I don’t speak English and he doesn’t speak a lot of Spanish, but we understood each other and we’re very excited about the possibility working together in this community that is very residential and where there is no Baptist work established,” added Miranda, in his native tongue.

Alcance is being sent out by Primera Iglesia Bautista Hispana in Hialeah, where Vladimir Cabrera serves as pastor. They began as a house church but when the group grew to 50, they began meeting at Primera Iglesia. Cabrera urged the group to consider planting a church and as the they prayed, they felt led to follow his guidance.

Miranda, a Cuba native, is bi-vocational and formerly served as youth pastor and minister of music at Iglesia Bautista Trinity.

“I am very excited that pastor Samuel Miranda has begun ministry in this area of our city,” said Natanael Vicens, director of Hispanic Ministries for the Miami Baptist Association. “Miranda is a man of God who has been serving from a very young age and is dedicated to the Kingdom. We hope to see great things.”

The Alcance family is excited and has a strong desire to impact its community, said Miranda.

“We hope to be so present in this community that if the rapture came and the whole church disappeared, we would be missed.”

“As the modern missionary saying goes,” said Vicens, “let us do great things in the name of God and let us expect great things from God.”