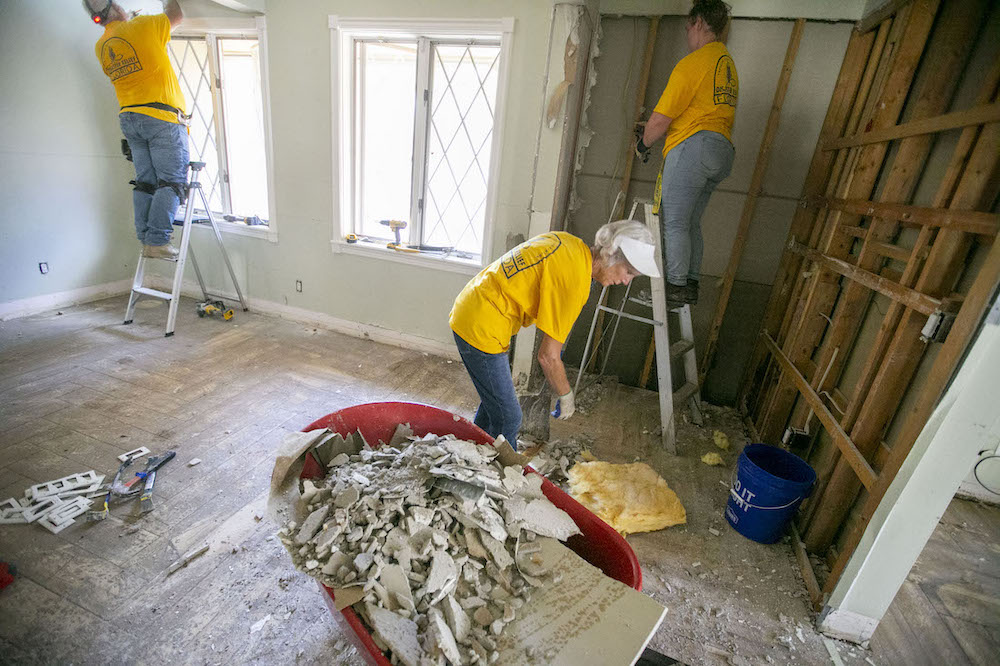 Pictured Above: Florida Baptist Disaster Relief volunteers do a clean out of a 7500 square foot home in Heritage Farm in Fort Myers, Fla., on Tuesday, October 4, 2022 after Hurricane Ian brought more than four feet of water into the home. Southern Baptist Disaster Relief teams are providing food and other rescue help across the communities effected by Hurricane Ian last week. Send Relief photo by Alan Youngblood

FORT MYERS – As Hurricane Ian rolled in Wednesday afternoon, Sept. 28, Wade Harmon was on the fifth floor of the Larsen Health Center Nursing in Fort Myers where his wife was working.

“They let family members in while she was working, and so we saw the whole [storm] blow by…the surge coming in, the winds blowing,” Harmon said. “The building is swaying. It’s powerful beyond anything you would think.”

Harmon serves as pastor of missions for McGregor Baptist Church in Fort Myers as he helps to coordinate the various response efforts the church is currently supporting—hosting a Southern Baptist Disaster Relief (SBDR) team of volunteers, accepting and distributing clothing donations as well as managing a network of members meeting one another’s needs in the community.

For Harmon, this was the third storm he and his family had endured, though 2017’s Hurricane Irma did more damage to the church facility and campus. They were far enough inland and positioned such that the storm surge didn’t flood their building.

As SBDR volunteers with Florida Baptists ventured farther toward the coast to assist homeowners, they heard harrowing stories from people who rode out the storm.

One survivor told volunteer Ron Cook’s team about a neighbor who passed away and another, an 80-year-old man, who survived by riding the storm out in his van, breathing via a small air pocket as waters from the storm surge filled his vehicle and carried it away.

On Tuesday, Oct. 4, Cook’s team assisted homeowners Stan and Amy Wiggins in removing flood damaged furniture, baseboards and other fixtures after four feet of water flooded the first floor of their home.

They evacuated to Amy’s sister’s house about 15 minutes away.

“The day of the storm, I got a text from a neighbor who had escaped to their attic. They were in a one-story house,” Amy said. “I got another text from another girl in our neighborhood who said they were on their counters watching their stuff floating by. We knew when we got home it would be bad.”

The Wigginses reached out to their McGregor Baptist Church family requesting help, and Florida volunteers with Cook’s team stepped up to respond as they’d done for many others in the community this week.

“It’s overwhelming as far as the sense of gratitude and just not knowing where to begin as far as expressing how thankful we are and how unexpected it is,” said Stan of the help he and Amy received from Southern Baptists. “It was daunting to see what was before us and not even really knowing where to begin and then to have so many people come in and just lend hands and want to help out.”

Cook’s team began recovery efforts, like their work with the Wiggins family, the day after the storm.

“We’re doing a mud out of their home. What that entails is removing all of their personal possessions that were affected by the flood waters,” Cook said. “After that, we will remove all of the affected dry wall, the insulation, taking everything down to the studs. Then, we will be spraying for mold so that we can get this home as livable as possible for them while they wait for the rebuilding.”

An “incredible number” of work orders requesting help have been coming in, Cook said, and more SBDR teams of volunteers from outside Florida will begin traveling in and sharing the load to meet needs in the name of Jesus.

In the meantime, Southern Baptists of Texas Convention (SBTC) disaster relief volunteers are cooking hot meals through their mobile kitchen in the McGregor Baptist parking lot. Theirs is one of nine SBDR kitchens in southwest Florida that have spread out from multiple different state SBDR teams. Canteen vehicles with the Salvation Army have been delivering food from the SBTC kitchen at McGregor out into the community.

“We meet several needs of the people. We meet the spiritual needs of the individual. We meet the physical needs of an individual,” said John Robertson, an SBDR lead volunteer with the SBTC kitchen and a member of Flint Baptist Church in Flint, Texas. “I have prayed by the tomatoes at Walmart with people before, it’s just wherever it is…Often times, we get to witness with people more often than you might think.”