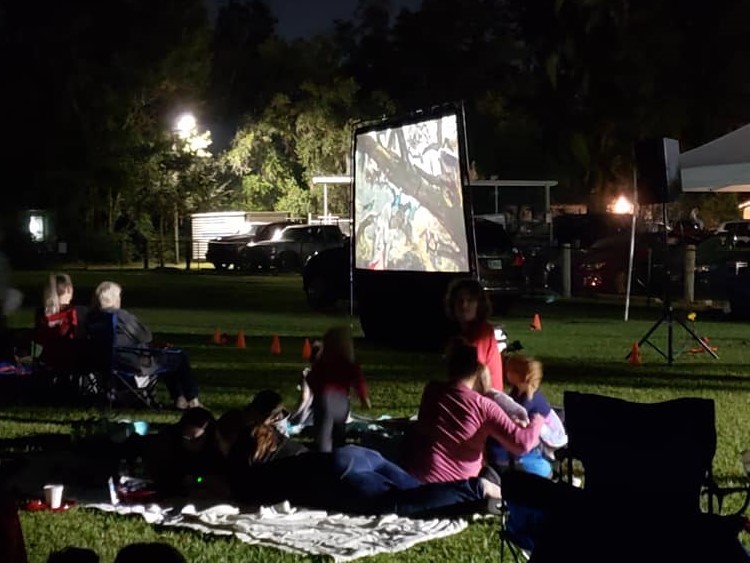 JACKSONVILLE— With a stated mission “to intentionally engage the world with the love of Christ,” Holiday Hill Baptist Church is starting in its own backyard—literally.

In November, more than 400 people descended upon the church’s property with lawn chairs and blankets in hand to watch an outdoor movie on a beautiful fall night.

“We had people walking, golf carting, driving, to attend the event,” said Albert Byrd, pastor.  With several cleared acres available in the back of the church’s property, there was plenty of room for people to sit on chairs or blankets.  A large screen showed the latest version of “The Lion King.”

The church joined hands with a local school PTA and two neighborhood associations, to host the outdoor movie night Nov. 14.

In the past, the church hosted an annual October Fall Festival which usually drew 700 people. But due to COVID-19, this year the festival was cancelled. Still wanting to offer something to the community that would be low-key and outdoors, church leaders decided to host a move night with food trucks.

Typically, about 150 people have attended past movie nights so they were surprised more than 400 people showed up for the event.

A portion of the proceeds from the food trucks was earmarked for the school’s PTA, which resulted in adding $750 to the organization’s treasury. Because one of the neighborhood associations paid for the movie rental, the church’s biggest expense was promoting the event, which was minimal, according to the pastor. 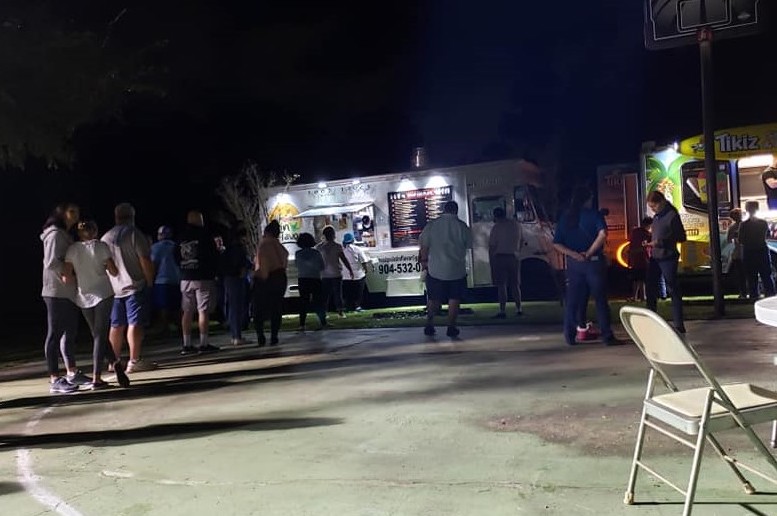 “One thing we’ve learned during COVID is that you can do quality ministry without a lot of money, if you’re creative. And if you will build a culture toward the community, they will want to be a part of what you’re doing,” said Byrd.

Begun in 1964, Holiday Hill is located on the south side of Jacksonville in the middle of three well-established neighborhoods – Glynlea, Grove Park and Holiday Hill, with Holiday Hill Elementary School nearby.

“For us being located in the middle of neighborhoods, if we don’t have good community relationships, we will shrivel up and die,” said the pastor who has served the congregation for 22 year. “To be viable, we must be involved in our community.”

Community involvement includes partnering with the local elementary by providing mentors for students as well as hosting the annual fifth grade graduation.

In addition, the church allows groups to use their building at no charge, including a local Syrian congregation that holds their children and youth activities at the facility on Friday nights. And this month, December, the church offered a Holiday Market for the neighborhoods.

Holiday Hill wants to be a place in the community that people look to use, the pastor said.

Community involvement “builds our reputation in the community,” said Byrd.  “And when people have spiritual needs, issues, they think of us, come to us to meet that need. People here know that we love them and we’ll serve them.

“This is what we do as a church,” he added. “We serve others whether they come to our church or not, whether they agree with us or not.  Our church people have caught the vision that it’s not your church, it’s not about you; it’s God’s church.”

Craig Culbreth, Florida Baptist Convention’s east region catalyst, said “Pastor Byrd is an amazing faithful pastor. He really understands the idea that the church needs to reach its community.  I’m so thankful for men like him.”

Summit Church puts care for the vulnerable at forefront