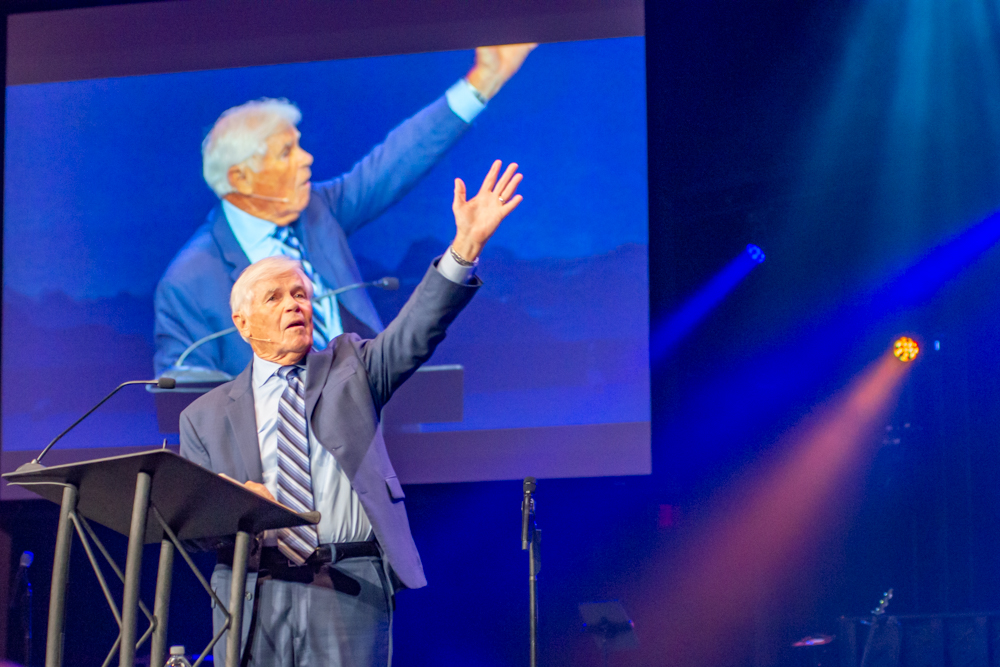 LAKELAND–In the final sermon of the 2021 Florida Baptist Pastors’ Conference, Jim Henry, pastor emeritus of First Baptist Church, Orlando, encouraged pastors to “consider” Jesus when they find themselves in dry or difficult circumstances, saying, “Consider Him so that you will not grow weary and lose heart. He will get you through.”

Drawing from Hebrews 12:1-3 and Revelation 19:11-16, Henry opened his sermon by stating, “You have to be focused in the race of life.” Some people focus on themselves, others, what others think, wealth, power, position or prominence, “We, as brothers and sisters in Christ, focus on Jesus.”

He then led pastors to consider five facets of who Jesus is. First, he described the “superiority” of Jesus, drawing attention to various New Testament descriptions of Him. Henry described Jesus as One who is unique, holds uncommon offices, and has an undeniable character, unprecedented mission and unceasing ministry.

Second, Henry read Acts 4:12 to describe the salvation that Jesus brings. In Hebrews 12:2, Jesus “sat down,” Henry said, because “the work of our salvation has been completed.” Henry said that Jesus then stood up again when Stephen was stoned to death as the first Christian martyr, in order to “welcome him home.”

The pastor emeritus recalled a man he led to Christ in Panama City several years ago. The man questioned if Jesus could forgive any sin, and Henry assured him that Jesus could. Henry later discovered that the man had been captured by the Federal Bureau of Investigation and might face execution because he had abducted and murdered a woman. “I was standing next to a man with blood on his hands, and I will see him in heaven one day,” he said.

Third, Henry stated that Jesus brings sin under subjection in the Christian’s life, reading Acts 6:17. The Christian “used to be” a slave to sin but has been set free, he said. “Sin no longer has rights over us,” he stated, as he described an alcoholic man whom God delivered from his addiction.

Fourth, Jesus provides a sense of significance in a believer’s life, Henry stated. Christians do not find significance by their gender, racial or sexual identity, he said, but by their standing in Christ as children of the “Father who is the King of the universe.

“My identity is who I am in Christ Jesus.”

Finally, Christians can be certain of the victory of God’s kingdom, Henry said, reading Revelation 11:15. Christians remember Lent, as the time of Jesus’ temptation; Good Friday, as the day that Jesus was crucified; Easter, as the day of Jesus’ resurrection when “death’s lockdown was shattered,” and Pentecost, when the Holy Spirit filled the church. He stated that one more day is on God’s calendar—“the day when the King is coming.” Nothing can stop that day from coming, he said.

“What a wonderful Savior we have.”

Henry was pastor of First Baptist Church in Orlando from 1977 until his retirement in 2006; he also served as president of the Southern Baptist Convention from 1994 until 1996.

In an interview with the 2021 Pastors’ Conference President Cliff Lea prior to his sermon,

Henry discussed the challenge of relocating First Baptist, Orlando, while he served as pastor; recalled his transition to pastor emeritus when David Uth was called to pastor the church, and described his time as SBC president as “one of the greatest privileges of my life.” He encouraged pastors to “endure” when they face dry spiritual times. “Those moments come for all of us,” he said.

Barahona: ‘Be holy and of one accord to advance the gospel’