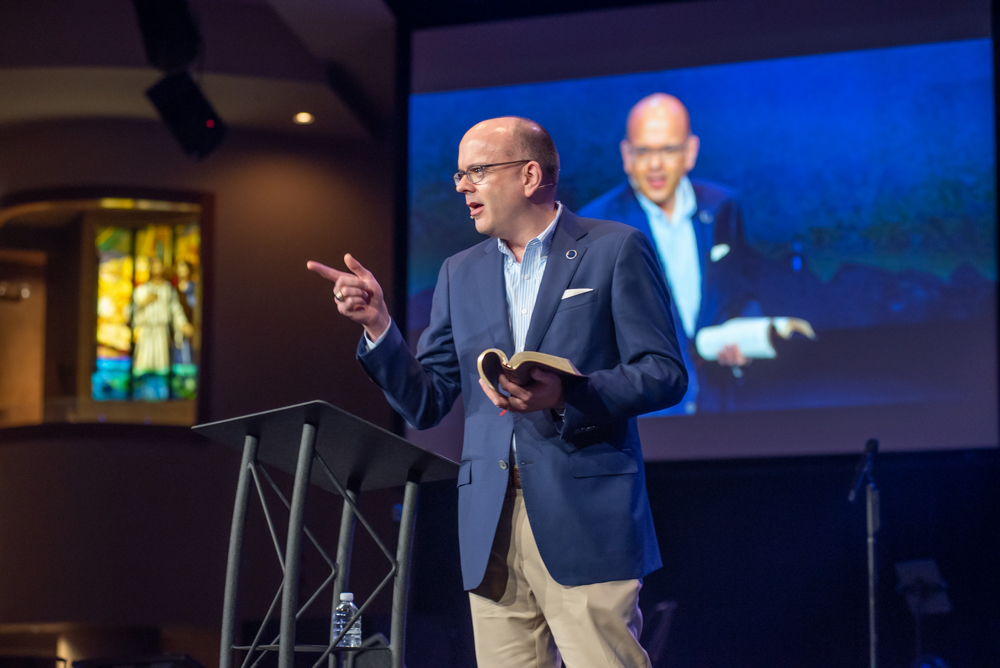 LAKELAND–Stating that he is “burdened about where we are in this moment in Southern Baptist life,” Adam Greenway, president of Southwestern Baptist Theological Seminary, urged Florida Baptist pastors to keep their eyes fixed on Jesus.

“If our eyes are fixed on Jesus, we will elevate evangelism and be committed to cooperation,” he said.

The threats to both evangelism and cooperation are “real” in today’s Southern Baptist Convention, said Greenway, a native of rural Frostproof, Florida, where he made his profession of faith, was baptized, affirmed his call to ministry and served as interim pastor at his home church as a high school senior.

Speaking at the 2021 Florida Baptist Pastors’ Conference Nov. 8 at Lakes Church in Lakeland, Greenway lamented, “We’ve got our eyes fixed on other things.”

With Mark 2:1-12 as his text, Greenway said that the four unnamed men who brought their paralytic friend to Jesus had “fixed their eyes on Jesus, doing together what none could do alone. They were willing to cooperate to do whatever it took to get this man to Jesus,” believing that the paralytic man’s life would be changed by Jesus.

“What’s happening here [in this Scripture] should be happening in our churches,” he said.

The paralytic man, Greenway noted, was unable to get to Jesus on his own, and his friends, undeterred when they faced obstacles, ultimately cut a hole in a roof to get their friend to Jesus.

Today’s believers often give up on sharing the gospel if they are faced with one obstacle, such as a person not being home during an evangelistic visit, he said. “Are we looking for excuses or opportunities?” asked Greenway, who said he regularly finds opportunities to share the gospel as he travels on airplanes.

Many Southern Baptists today, he said, “find reasons not to build bridges but create chasms.

“Somehow we have forgotten to rally around the Bible as the the word of God and the Baptist Faith and Message as our confessional statement,” he said, noting that many Southern Baptists are focused on unimportant matters the “lost population … doesn’t care one whit about.”

When non-believers see Baptists fussing, he said, they “see our eyes are not on Jesus,” adding, “Resolutions in Southern Baptist life are meaningless; they are expressions of opinion. It’s time to get the main thing the main thing.”

In closing, Greenway stated, “It’s time to stop finding reasons to separate. There’s never been a better time to cooperate than today.”

Greenway was elected as the ninth SWBTS president in February 2019; he is the first alumnus to serve in the seminary’s presidential role in more than 25 years.

In an interview with the 2021 Pastors’ Conference President Cliff Lea prior to his sermon, Greenway noted God’s leadership in his life, saying, “When God writes a script, it’s a whole lot better than anything you ever plan. Never underestimate how God can use someone like you.”

Lea, pastor of First Baptist Church in Leesburg, also led Greenway to describe his commitment to his wife and two children, even with a crowded schedule, as well as his passion for intentional evangelism, even as he works in a setting where most people are Christian.

Lino challenges pastors to make prayer a priority; be filled with the spirit