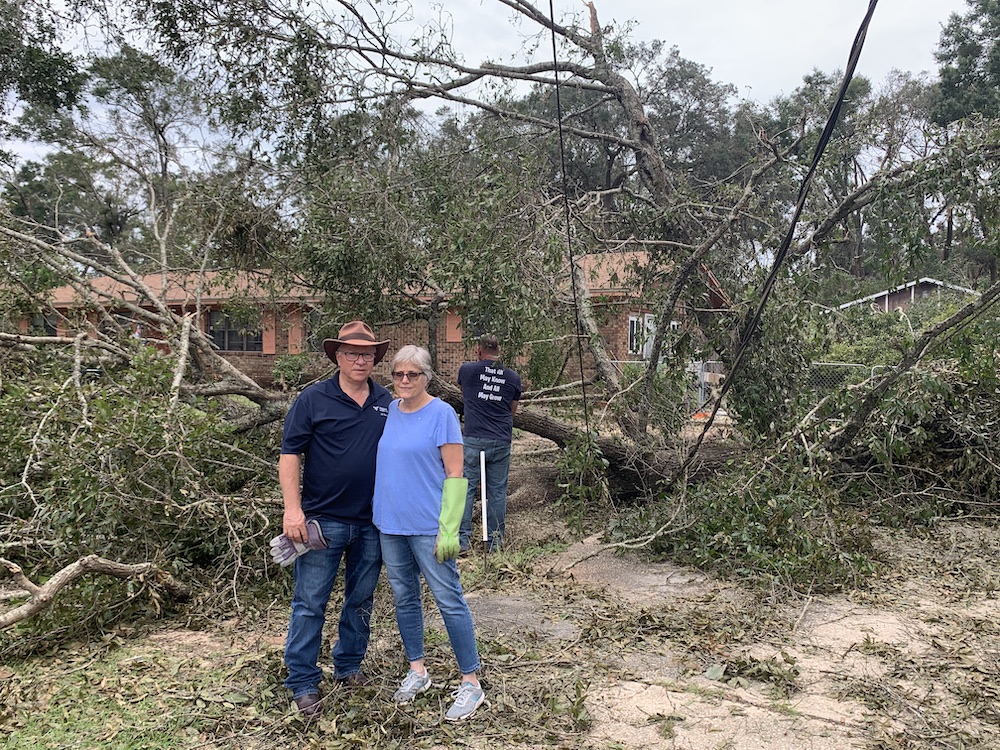 PENSACOLA–Residents in Pensacola and South Alabama are calling Hurricane Sally “Ivan’s little sister,” in memory of the Sept. 16, 2004 storm that ravaged the Florida/Alabama coast.

Exactly 16 years from the date, Sally barreled along the state line as a Category 2 hurricane with historic flooding and devastating 105 mph winds. In the aftermath of this natural disaster, the nature of God and His people are being revealed in a multitude of ways.

Brian Nall, executive director of the Pensacola Bay Baptist Association, has seen firsthand how the body of Christ rises up in desperate times. God’s people rallied around his family when their home in Pace flooded in less than an hour during the storm.

“Responding during and after a crisis is a natural reaction for God’s people,” Nall said. “Whether helping a neighbor clear a flooded home, praying earnestly, or distributing food and resources, the body of Christ is faithful to answer the call. There are just too many stories to tell!”

The west Pensacola community was unprepared for the sudden, eastward turn of the storm. Local weather stations had predicted an influx of rain, but in the late evening prior to the storm’s landfall, forecasters scrambled to tell residents that the course had shifted, and Pensacola would receive a direct hit for the destructive winds.

Tom Edwards works for a dialysis company and was on 24-hour call during and after the storm. He and his wife, Sheila, lead the Westside Ministry at West Pensacola Baptist Church, organizing service opportunities for the church and outreach efforts to the community. They regularly respond as the giving side of service.

But now, after working 20-hour days to ensure dialysis patients receive life-saving care, the Edwards were the ones who needed help. Sustaining massive tree and wind damage to their property, the couple was overwhelmed to see “God’s Cavalry” marching down their street to help in the days following the storm.

“It has always been our privilege to serve the church or the community and show the love of Christ to others,” said Edwards. “It was very humbling and uplifting to see the church come together to serve us in our time of need.”

When one of their unchurched neighbors asked who all the people in their yard were, the couple said, “Our church family.” The neighbor responded, “Go figure. It’s always the churches that show up first.”

Sophia Smith was the youngest member in Westside’s cavalry and spent her sixth birthday with her parents helping the Edwards clear a path to their driveway.

“I care about them and they care about me,” the youngster said. “I wanted to help them – even on my birthday.”

Her mom, Krissy, said she was taught by her parents to “be” the church. “Besides their salvation, my biggest goal is to show my children how to serve others before themselves. I’m blessed to watch my daughter put feet to her faith at such a young age.”

The Smith family also serves in the church’s Westside Ministry and cleaned yards, cooked and delivered food to many of the families after the storm.

More than 140,000 residents in the region lost power immediately after the storm. Many are still waiting for the power to be restored. Families without generators lost their refrigerated and frozen food, and many cannot afford to replace what was lost. 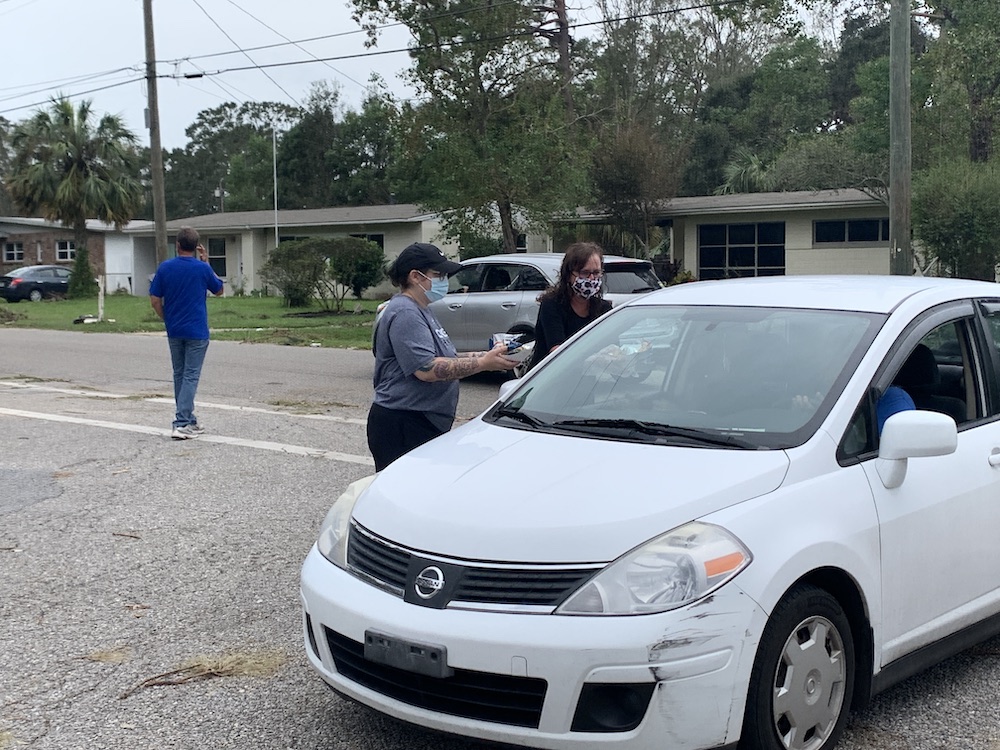 Food ministries during times like these can be opportunities for the Gospel. The Florida Baptist Disaster Relief Team, stationed at Hillcrest and Olive Baptist churches, provides spiritual counsel and prayer to the hurting while distributing ice, water and boxed food.

Nathan Brown, pastor of Ray’s Chapel Baptist Church in McDavid, and his wife, Danielle, make serving others a teachable moment for their five boys.

“Our community has been caring for one another through calls, texts, offering to fill gas cans, picking up necessities, and delivering food to those in need,” said the pastor who serves on Florida Baptists’ State Board of Missions.

“It’s God’s love on display in a tangible way. It’s nothing fancy, just trying to be the hands and feet of Jesus by loving our neighbors as ourselves.”

Meeting physical needs often opens doors to spiritual conversations. Danielle Brown said Christians are responsible for showing the next generation how to look beyond themselves and see the needs of others.

“Lost people don’t generally just show up at our door,” she said, “Every opportunity like this to share His love is a chance to share the Gospel. I want my boys to practice this early on.” 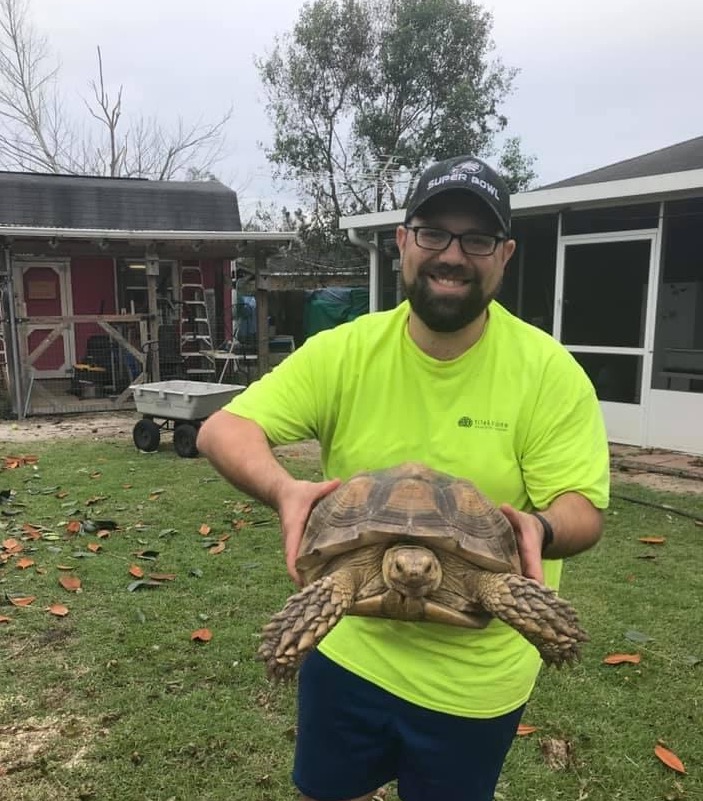 Josh Wallnofer, pastor of Pensacola’s Klondike Baptist Church, said he and volunteers from the church “have been on tops of roofs and in backyards that look more like swamps than a family home, cutting trees and removing debris.”

“One of my favorite things has been neighbors asking the families we serve, ‘where did you get these people from?’”  When the family replies that the volunteers are from their church, the Klondike volunteers then go over to the neighbor’s home and cut their tree next.

The next question that arises, “How much is it going to cost?” Wallnofer recalled. He tells them, “It’s free, just like the Gospel. Getting to pray with people and share Christ’s love is gold.”

Klondike volunteers have been going door-to-door in a neighboring apartment complex distributing food boxes that Florida Baptist disaster relief delivered to nearby The Point Church.

“People that were down to their last meal smiled, some for the first time in six days,” Wallnofer said. “And while they didn’t have power, they now have food to get them through after a catastrophic loss.

“To pray with them and remind them of the love of Jesus was a reminder of Christ׳s words, ‘It is more blessed to give than receive.’”

Partnering together with fellow Baptists, west region churches are on the front lines serving and sharing the love of Jesus with their neighbors, being “Right Beside You.”

Financial donations can be given online at www.flbaptist.org/give and click Disaster Relief. Mail-in donations designated for Disaster Relief can be sent to the Florida Baptist Convention at 6850 Belfort Oaks Place, Jacksonville, Fl 32216. Contributions can also be made through local Southern Baptist churches. 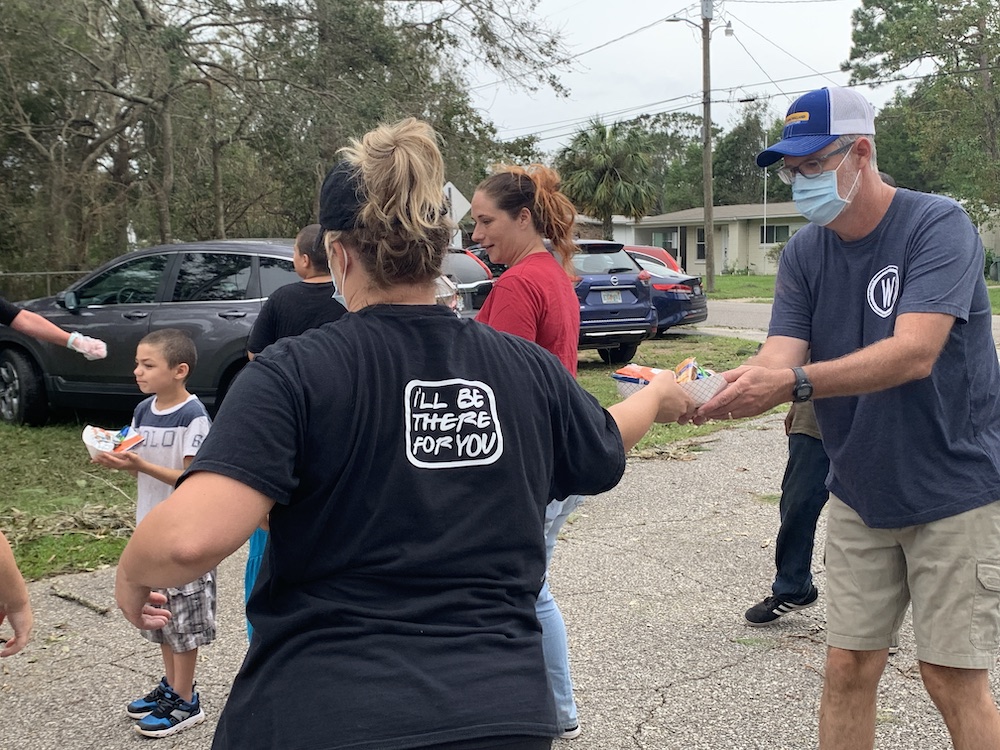