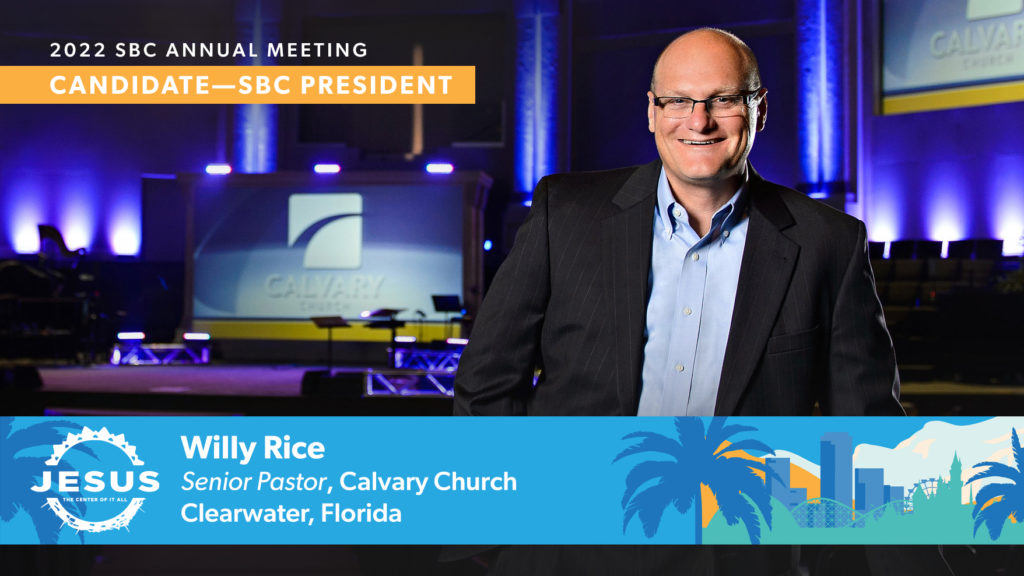 Florida pastor Willy Rice to be nominated for SBC president

CHARLOTTE, N.C. (BP)—Willy Rice, pastor of Calvary Church in Clearwater, Fla., will be nominated by Clint Pressley, pastor of Hickory Grove Baptist, for the president of the Southern Baptist Convention this summer at the 2022 SBC Annual Meeting in Anaheim, Calif.

The announcement comes a day after current SBC President Ed Litton of Saraland, Ala., announced he will not seek a second term.

Rice, who has pastored Calvary since 2004, was a member of the church during high school, was called to ministry there, and met and married his wife, Cheryl, at the church.

Rice, a current trustee for the North American Mission Board, served as president of the Florida Baptist Convention from 2006-2008, served as president of the SBC Pastors’ Conference in 2015, chaired the 2010 SBC Committee on Committees and chaired the 2016 SBC Committee on Nominations. He also delivered the convention sermon at the 2021 SBC Annual Meeting where Litton was elected.

“In his convention sermon at the 2021 SBC Annual Meeting, Willy Rice issued a prophetic call to our Convention, warning us of the dual threats of theological drift and of a pharisaical spirit of pugilism and condescension,” Pressley said. “He is more than a statesman—he’s a man who understands the times, sees the challenges before us clearly, and has the vision, wisdom, and courage to lead us. I can say with all confidence that he is the man to meet the challenges of this moment.”

During his tenure as pastor, Calvary has grown to include three campuses, and in 2016—the church’s sesquicentennial—the church adopted goals that included partnering through church planting and revitalization with 150 congregations across the country and around the world by 2025 as well as seeing members support 150 children through adoption or foster care. To date, Calvary has been part of more than 90 church plants or revitalization efforts, and more than 50 families and 120 volunteers are involved with adoption and foster care. In addition, there are seven missionary units from Calvary on the field or in the appointment process with the International Mission Board.

According to its Annual Church Profile statistics, Calvary reported 218 baptisms in 2021 and giving through the Cooperative Program of $532,533.41, approximately 7.5% of its annual budget, along with Annie Armstrong Easter Offering giving of $27,902.62 and Lottie Moon Christmas Offering giving of $52,023.01 in 2020. Giving totals for 2021 have not yet been reported.

Prior to the pandemic, the church averaged more than 3,600 people in weekly worship attendance across its three campuses.

Before coming to Calvary, Rice pastored churches in Florida and Alabama. He is a graduate of Samford University in Birmingham, Ala., and has an M.Div. and a D.Min. from New Orleans Baptist Theological Seminary. He and Cheryl have three children and six grandchildren.