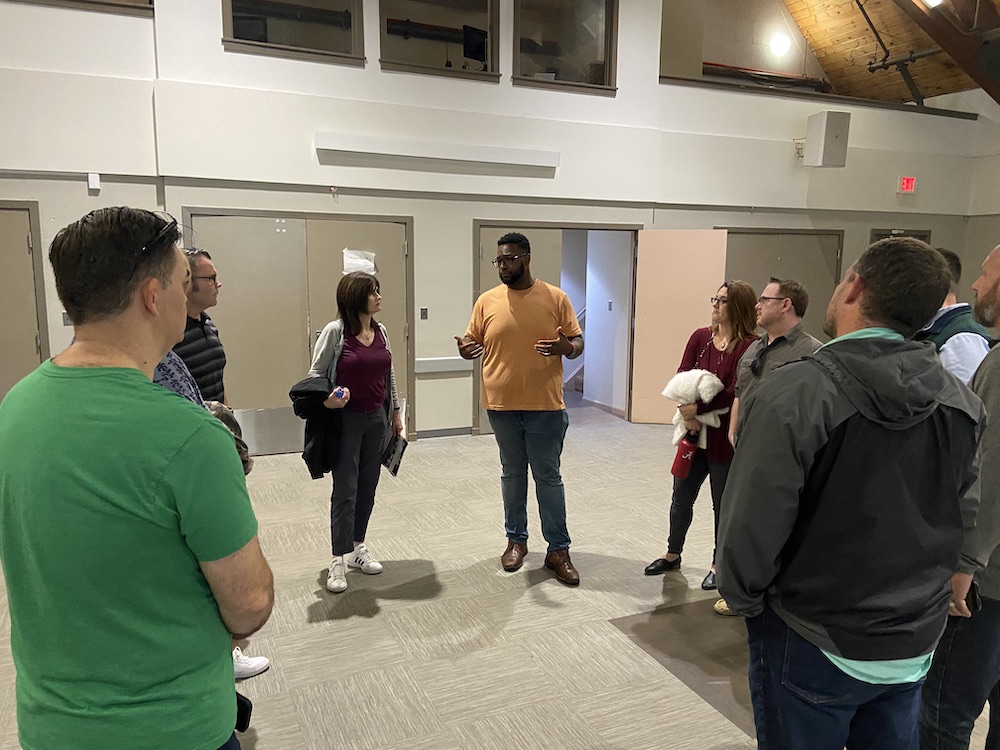 NEW ENGLAND–In a section of the northeastern U.S. that was once the cradle of American independence and the Great Awakening, religion is no longer part of the culture. Instead, like the historic churches that sit empty and unused, the gospel is viewed as part of a once-important past no longer relevant or necessary to modern life in New England.

For pastors trying to share Jesus in a spiritual darkness akin to modern Europe, the indifference, cold weather and remoteness they face can be discouraging. So, a team of Florida Baptist pastors, led by

Craig Culbreth, East region catalyst for the Florida Baptist Convention, recently traveled to New England to offer encouragement and friendship to pastors there.

The idea of the pastor-to-pastor connection was first birthed in February when Hal Haller, associate executive director of the Baptist Convention of New England, visited with South Florida Baptist pastors, urging them to come alongside New England Baptist pastors.

The BCNE serves approximately 380 churches spread across Connecticut, Rhode Island, Massachusetts, Vermont, New Hampshire and Maine, and Haller already had a connection with Florida Baptists as he planted Living Hope Baptist Church in Middleburg in 2012 and worked in church planting with the Jacksonville Baptist Association. His history with Florida Baptists led him to seek the partnership between New England Baptists and Florida Baptists.

From Florida to New England

Culbreth, embracing the partnership opportunity that would reach beyond geography and into the hearts of pastors and their congregations, gathered a team of pastors from his region and prepared them to go to New England.

“These Florida pastors had never met before, so we did several Zoom calls prior to the trip so everyone could be introduced and get to know each other before we left,” said Culbreth.

The Florida team, which included wives of some of the pastors, drove between churches, towns and communities throughout western Massachusetts, Connecticut and Rhode Island. They visited small, rural congregations, historic churches in Boston and a chapel near Yale University in Connecticut.

“The trip was about congregations encouraging congregations and pastors encouraging pastors,” said Culbreth. “Our team met with 18 pastors over the week; we saw their churches and their communities and got to pray with them and bless them with gift cards and meals.”

Culbreth added, “Being a pastor is not an easy calling no matter where you live, and though each church and area has unique challenges, we all share the common call: to reach the world for Christ. Reaffirming that commonality–that mission we share–and encouraging each other to keep the faith were powerful.”

Daniel Helms, teaching/vision pastor at The Branch Community Church in Palatka, decided to go on the trip to capture the needs of the BCNE churches, which his congregation would then pray about addressing.

“The Lord taught me that I have a responsibility in Palatka to raise up disciples who are willing to go across cultures to spread the good news of the gospel … even if that other culture is in New England and not Uganda.”

Clint Wagnon, lead pastor at CrossWay Church in Deltona, also sensed God leading him to go on the trip.

“Given the influence the region has on American culture and need for gospel work in the region, we sensed that God was leading us to go see for ourselves how we could join His mission.”

Wagnon returned with a clear mission: “Bottom line: The need and opportunity are tremendous, but the workers are few. It made me pray for potential planters and pastors across the nation to hear the ‘New England call’ like Paul heard the plea from Macedonia in his midnight vision.”

“Though New England may be one of the least religious regions in the nation, that does not mean that God is not working in our area. Pre-COVID, we had record baptisms in seven out of eight years and the BCNE has joined with our partners to help our churches plant 169 new congregations in the past 15 years. God is at work in New England! We invite others to come join Him, and us, in that great work.”

Culbreth said the past two years have been hard on churches and pastors throughout the U.S., but more so in New England which spent a lot more time shut down than did Florida.

“It just reminded me how important it is to encourage and stay connected to our pastors. Our little statement, “Right Beside You,” (the Florida Baptist Convention tag line) is more important than it was when we came up with it seven years ago,” Culbreth reflected. “Seven years ago, it was cool; today it is a necessity.”

The relationships formed during the trip have continued now that the pastors have returned home.

“One of the major things God did during this trip was to create a brotherhood among the pastors who went. We were able to share with each other, pray together and support each other, and we’ve been texting back and forth and staying in touch since the trip concluded.”

Garold Smith lives in Fleming Island and is an active member of Hibernia Baptist Church. Garold is a graduate of the University of Colorado – Denver and has spent his career in public relations, community engagement, marketing and communications. He and his wife are parents to two grown children. Garold enjoys reading, music (listening and playing), spending time with friends, and growing in his relationship with Jesus Christ.