Javier Sotolongo, first vice president of the 2018 Florida Baptist State Convention and pastor of Iglesia Bautista Estrella de Belen in Hialeah, opened the third session of the Annual Meeting by greeting the messengers and welcoming them back.

He then introduced Sing Oldham, vice president of convention communications and relations for the SBC Executive Committee, who brought greetings from SBC Executive Committee Interim President D. Augie Boto. He praised Florida Baptist churches for their generous giving and their strong spirit of cooperation to accomplish much for the glory of God.

Recognitions Received by the College

Mike Kahn, Associational Mission Strategist for the Tampa Bay Baptist Association, nominated Ralph Alderman, Jr. for a second term as second vice president. “Ralph has served on the State Board of Missions and been a faithful lay leader for over 17 years at what is now Exciting Central Tampa Baptist Church as a deacon and a bible fellowship director.” There were no other nominations and Alderman was elected.

Bobby Patton, pastor of Life Springs Baptist Church in Tampa, nominated Randy Huckabee for his 13th term as recording secretary. “Randy has been a faithful lead pastor of First Baptist Church in Dade City, a past moderator of the Pasco Baptist Association. His church is one of the highest givers to Florida Baptist Children’s Homes and gives faithfully to the Cooperative Program.” There were no other nominations and Huckabee was elected.

Rummage led a moment of recognition and prayer for the Florida Baptist pastors who passed away in 2018.

“Let us bow our hearts before the Lord as we give thanks for these pastors.”

During the report, two videos also played showcasing how the FBCH came alongside a couple who chose life for their baby and a young man who found a home and love at the Children’s Home.

Right Beside You – Church Multiplication 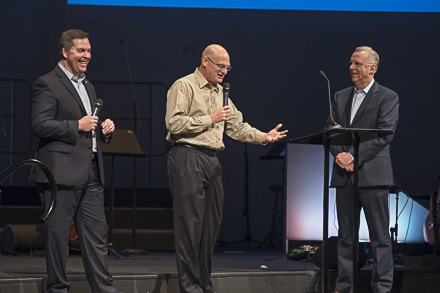 Out of a desire to leave a Gospel legacy that would be sure to last, Calvary has begun investing in multiple campuses, church revitalization and church planting.

“If you pour your life into just one church there’s no guarantee it will be going after you’re gone, but if you can plant churches you’re putting seeds in the ground,” Rice said.

Westbrook said for Calvary, church multiplication for Calvary means investing in dying churches in the area, planting churches across the nation and creating international partnerships.

“Multiplication has energized our church,” Westbrook said. “People want to do more than just write checks – they want to go.”