Arley DeJesus, pastor of Church Family of God, opened up the last session of the FBSC with a prayer in Portuguese.

Green recognized and thanked the 2018 FBSC officers. He also welcomed the 2019 officers to the stage so messengers and visitors might meet the new group to which Cummings and Wiggins were elected earlier in the day.

Rummage shared that registration of messengers and visitors stood just over 1200.

The first biblical message of the session was preached by Chip Luter out of Mathew 16:13. Luter, campus pastor of Idlewild at the Springs in Tampa, listed five characteristics of the church.

Green pulled five church planters up to the stage for a Right Beside You presentation about the One Family Beach Baptisms that took place earlier this year.

Jay Strack, president and founder of Student Life University in Orlando, closed out the 2018 Florida Baptist State Convention with a message that echoed the Convention theme ‘Faithful.’

Strack started by saying he owed a great debt of gratitude to Florida Baptists because it was in the state of Florida that he was called to the ministry and was licensed and ordained for ministry. 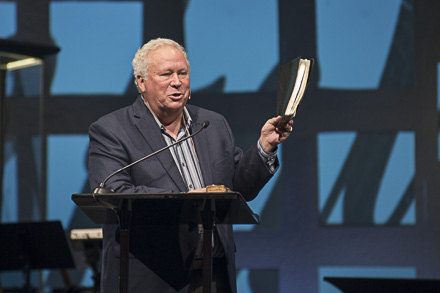 Strack described himself as someone who had never finished anything he started before he met Jesus. He was afraid that he would not be able to be faithful enough to God to keep his sobriety and not mess up the wonderful things God had brought into his life after he was saved.

“God is so faithful he can break any curse – he changed me and then I had the privilege of leading my father to the Lord,” he said.

“So many come to Florida looking for hope and a new life but the truth of the goodness of Jesus Christ is the only thing that will give it to them.”

Strack ended by encouraging pastors to be faithful to fulfill their ministries and do the work of an evangelist.