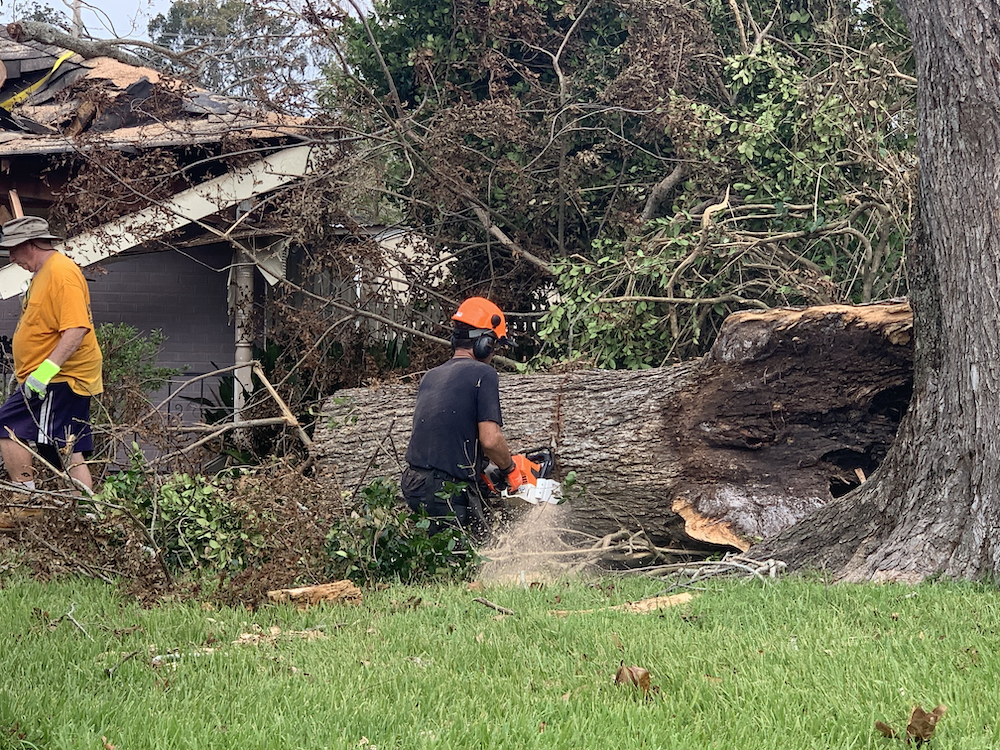 METAIRIE— Within days after Hurricane Ida struck the Gulf Coast of Louisiana on Aug. 29, Florida Baptist Disaster Relief (FLDR) volunteers stepped up to bring hope and help to the hurting people of Louisiana. They are also brought the life changing message of the gospel.

Since their deployment to Metairie, Louisiana, on the outskirts of New Orleans, the FLDR teams have led 32 persons to new faith in Jesus Christ.

“Two of those were drivers picking up a piece of equipment and one of our logistics volunteers led them to the Lord,” said David Coggins, FLDR state director. Others have accepted Christ as the teams ministered to them in their time of need.

The Florida team has been stationed at Metairie Baptist Church since Sept. 4. The 299 volunteers who have travelled from Florida during the past three weeks have received nearly 500 job requests and completed 327.

The jobs are primarily chainsaw and temporary roofing, and a few flood recoveries, shared Coggins. During their first week on the ground the teams spread out to assess the damage and completed 30 jobs. Currently clean-up teams are working in Metairie, Kenner and St. Rose areas west of New Orleans. 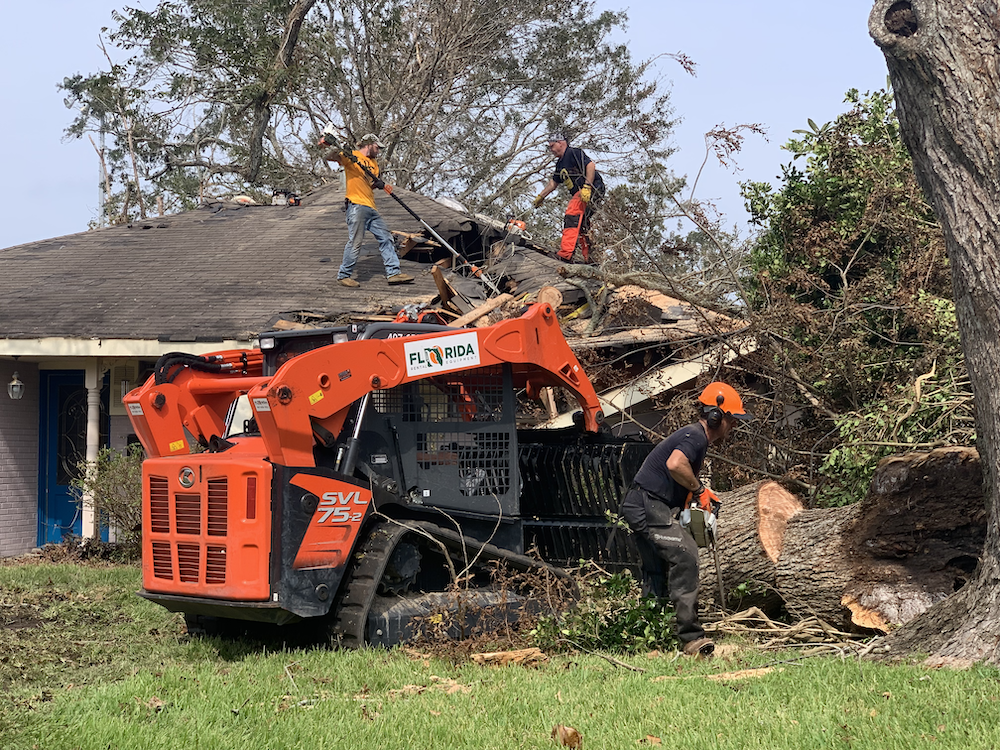 FLDR volunteers are preparing food for their teams and were not asked to provide mass feeding—a task Southern Baptist Disaster Relief volunteers from other states are handling in the hardest hit areas. Twenty-nine state conventions have responded to the massive recovery effort in the Bayou state.

Requests for help are sent to the FLDR volunteers from the Louisiana Incident Command call line, from a public number that has been published on Metairie Baptist Church’s website and social media. The community is walking in and “we have a contact with a pastor in St. Rose that is taking work orders there in his community and passing them along to us,” said Coggins.

Ninety-one Louisiana Baptist churches sustained serious damages during the hurricane, including 22 that suffered catastrophic losses. At least 85 pastors are facing significant replacement costs for cars, homes, and belongings, too.

In response to the devastation among Baptist churches, an initiative–churches helping churches–was created by the Louisiana Baptist Convention. For more information and to sign up, click here.

“Some of these churches do not have the resources to carry wind and hail coverage on their property because it is so expensive near the coastal areas,” explained Steve Horn, Louisiana Baptist Convention executive director. “Therefore, they don’t have insurance funds to repair and restore their churches.”

Coming from different walks of life, FLDR volunteers bring their experience, faith and a “desire to be right beside those who need help, hope and healing,” said Coggins.

Frederick Edwards is one of the volunteers who goes whenever he can. His first call out was 20 years ago when terrorists flew planes into the World Trade Center. 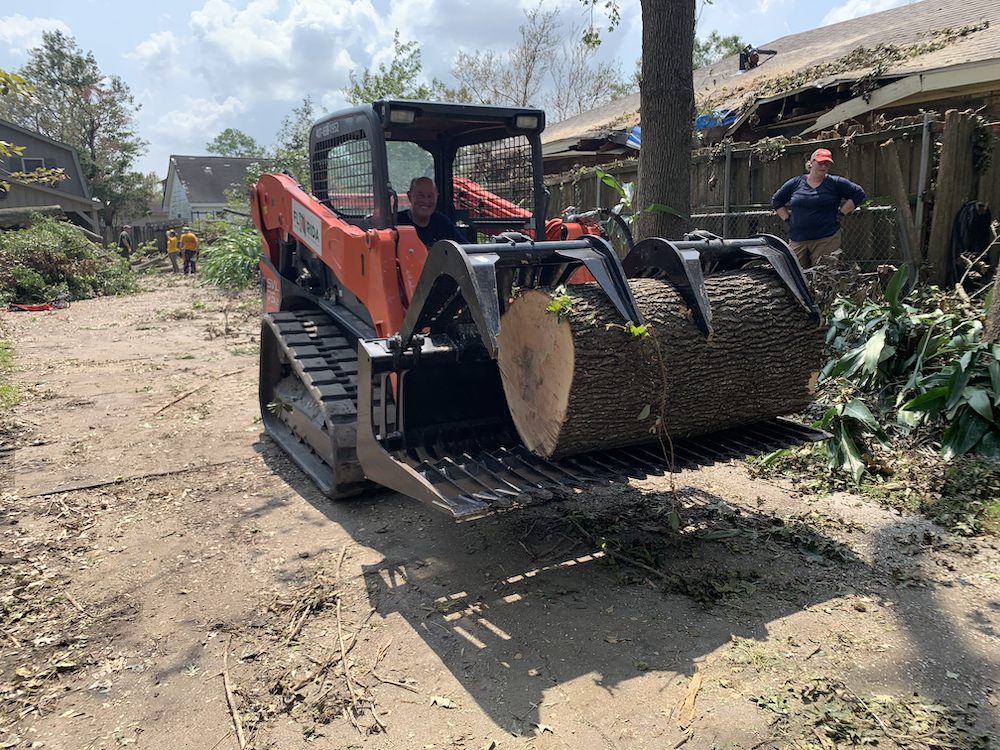 Trained to work in the feeding unit, Edwards recalls the troubling days following the attack on American soil saying he can still recall the sights and sounds during that first call out. But since then, Edwards has been all in.

Edwards now serves as a chaplain and takes every opportunity he can to serve people.

“This ministry has done more to get people out of the pews and into the mission field than anything I’ve ever seen,” he said. He and his wife, Cathy, who are members of Airline Baptist Church in Mayo, serve together as volunteers.

Sonny Davis of Pensacola is also on the ground at the FLDR command center. As a white hat, he oversees all the teams coming and going out of that location on any day.

“I’m concerned about what’s ahead,” said Davis, who works to keep everything flowing as efficiently as possible. That includes a computerized tracking system for teams, the priority levels of incoming jobs and data. His wife, Terry, is also a volunteer and handles logistics for the operation.

Former military and law enforcement members are also using their skills to serve during this time of need as part of an onsite management team that keeps equipment–like trailers, tarps and other vehicles–safe and provides security at the command center.

As a member of the onsite management team, Albert Melvin flew Cobra helicopters during Vietnam. “Most of the equipment that’s used for cleanup belongs to the individual who brought it,” he said.

By keeping watch over it so others can rest and recuperate from a long day’s work, Melvin — a member of Pine Terrace Baptist Church in Milton— can be a part of this ministry he loves. “Disaster relief is the best example of friendship evangelism. … Jesus said, ‘Feed my sheep,’ and we intend to be the hands and feet of Jesus in the community,” he said.

Luther Willis’ wife, Kathy, got him involved in disaster relief, and he’s also found a distinct way to serve through the onsite management team. As a retired detective with the sheriff’s office, Luther Willis has a unique perspective.

“We’re just giving back what the Lord has gifted us with,” he said. “I see it as I’ve trained 31 years for this right here.”

The Willises are members of North Oak Baptist Church in Citrus Springs, Florida.