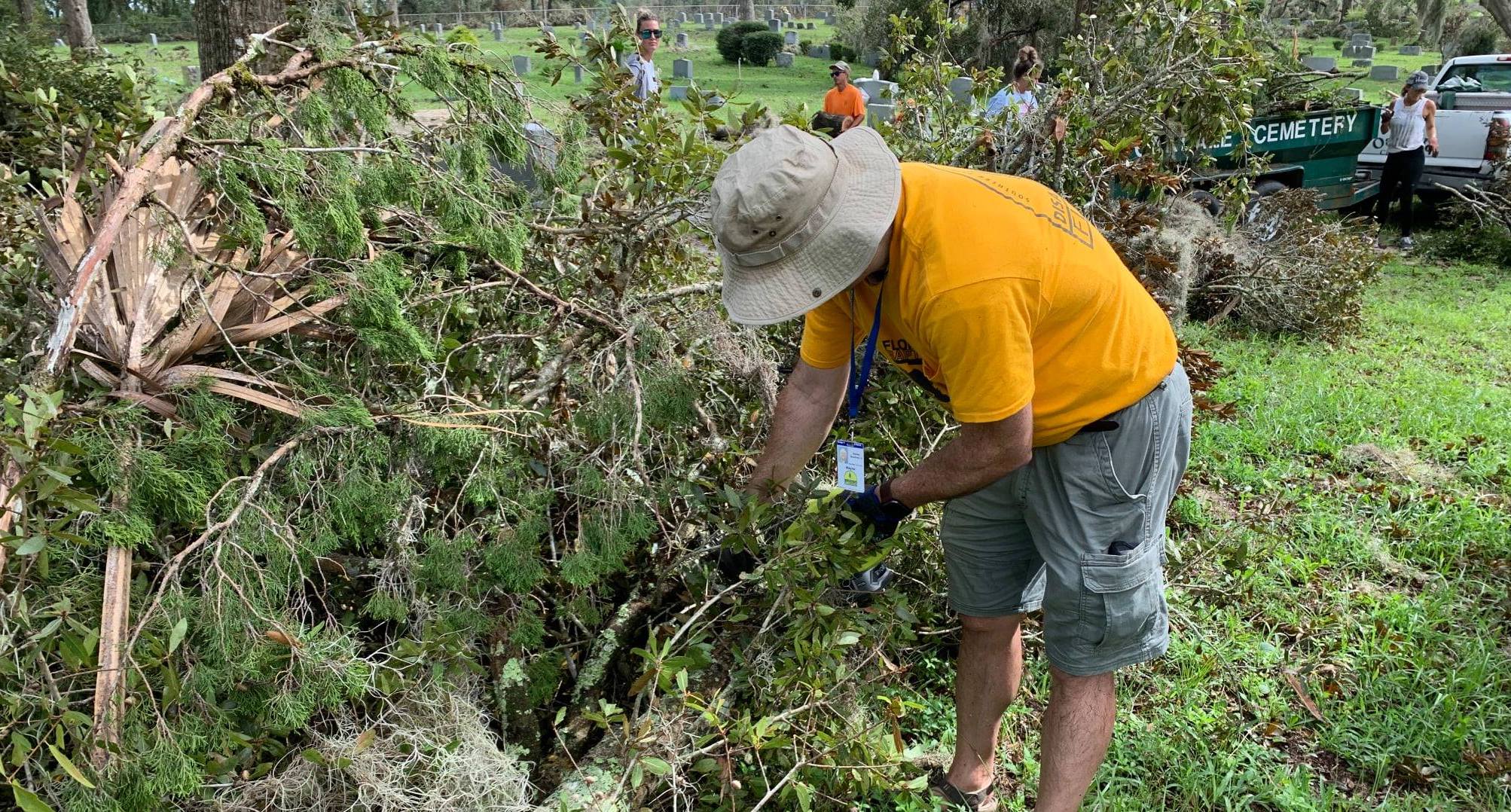 DELAND— Severe weather sweeping through Central Florida Aug. 18 spawned twin tornadoes with winds between 105-115 mph that left a 4.6-mile path of destruction through the DeLand community.

“I had just left church and gotten home 20 minutes before the tornado passed through,” said DeLand resident Brad Gwartney, state spiritual care coordinator for Florida Baptist Disaster Relief (FLDR). “When my ears popped, I knew that was not a good sign and when it was right above us it sounded like an explosion.”

Gwartney weathered the storm sheltered in one of the bathrooms in his home. His house, along with two other homes in the neighborhood, received significant wind damage requiring their roofs to be covered with a tarp to prevent continued damage.

“Thankfully, because I work with disaster relief, I always have blue tarp on hand,” he said.

“Everybody deals with these types of disasters differently,” said Gwartney, who serves as pastor of discipleship and administration at Stetson Baptist Church in DeLand.  “When you layer a disaster on top of our current COVID culture, the hope of the Gospel shines even brighter.

“My family was shaken by the impact of the storm, but we were able to use that difficulty as a teaching opportunity for our children who experienced it firsthand. Even when things are difficult, we can rely on God as the great provider and comforter He is no matter how difficult the situation.” 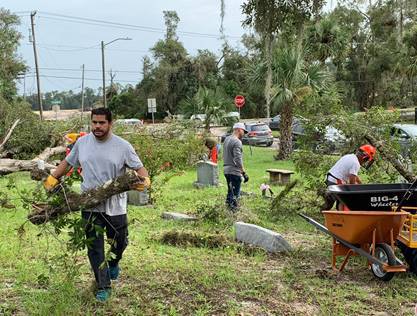 Seven teams of FLDR volunteers from DeLand, Orlando, Jacksonville, Tampa, Brevard and Apopka responded after the storm, laboring more than a thousand hours to complete 28 work orders that included covering roofs with tarps and removing downed trees. They partnered with volunteers from Stetson Baptist who also joined in the effort. The church served as a response center for families in need to call.

“One of the houses we worked on was a single mom’s home, said Gwartney. “She had several downed trees on her property and needed several thousand dollars to have them removed. She simply could not afford it. One of our volunteers overheard the conversation and offered our volunteered services,” he added.

“Survivors who experienced a much greater loss than I did were so excited to hear that people would come out and help them and ask for nothing in return. It was through our ability to serve our neighbors that we were able to share the hope found in a relationship with Jesus and other believers,” he said.

“Many of them were literally surrounded by the debris left by the storm. Their yards, their home and in some cases their livelihood were in shambles, and God gave us the opportunity to not just remove the debris but show them the hope that they made not have known they needed.”

Speaking to the Orlando Sentinel, Stetson’s senior pastor Dan Glenn said that at the beginning of the year, the church set a goal “to be more intentional in serving our community. Little did we know the things that would be in store. These tornadoes are another unfortunate stamp on a difficult and challenging year for so many already suffering.”

The 120 FLDR volunteers completed work in the affected area on Wednesday, Aug. 26.

Gwartney encourages churches to look within their walls and send volunteers to receive FLDR training which allows them to be prepared to assist during times of crisis. “If more people are involved, we are able to do more work.”