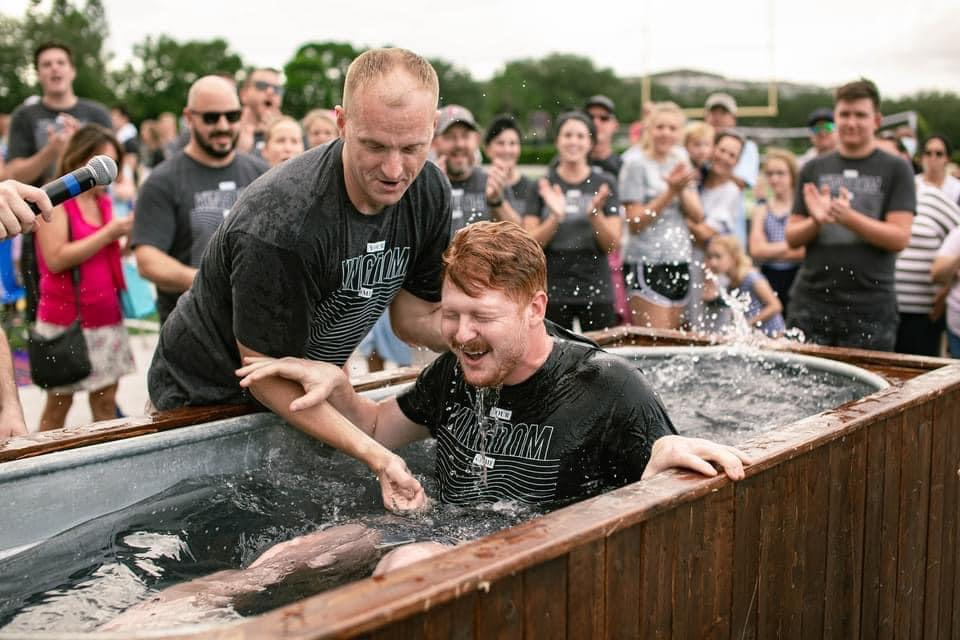 NAPLES— Since Alan Brumback’s call as lead pastor and his arrival in mid-September, First Baptist Church in Naples has seen baptismal waters stirred every weekend, having celebrated 42 baptisms in October and already scheduling another 15 in November.

“We are hearing stories daily of people getting saved,” the new pastor said.

Brumback was called to lead and rebuild Naples’ growing congregation as pastor in August. He came to the new role from Central Church in Sanford, where he served as pastor for almost a dozen years.

An active participant in Florida and Southern Baptist life, the Kentucky native was a member of the Florida Baptist State Convention’s credentials committee. He currently serves as a trustee for the International Mission Board (IMB) and on the leadership council for the Ethics and Religious Liberty Commission (ERLC). He holds the doctor in ministry and master of divinity degree from The Southern Baptist Theological Seminary in Louisville, Ken.

Although he is relocating to a new geographical region–from Central to Southwest Florida–Brumback says the mission remains the same.

“Our goal is to be a multi-generation, multi-ethnic, multiplying church.”

As Southwest Florida is experiencing rapid growth, Brumback believes the church is in a God-ordained position for multiplication through church planting.

“The increase in population opens the door for church planting…internationally and throughout Southwest Florida,” he said.

With a passion to see more church planting in the region and beyond, First Naples is looking to “expand the kingdom and not their brand,” he said.

“We’re not trying to be the biggest church in the area, we’re trying to be a sending church,” Brumback said. “We want to be the Antioch of Southwest Florida.”

Not only is the church committed to expanding their kingdom-impact through church planting, evangelism is also a strong component in the church’s renewed vision.

With baptisms planned for every Sunday between now and Thanksgiving, the excitement and momentum has become contagious throughout the church family.

“We want to baptize as many as we can and disciple them,” said Brumback. “We are developing processes now for intentional disciple-making.”

During one baptismal event, the church gathered in true, celebratory fashion on their football field for bounce houses, food, and outdoor baptisms. Since the big event, the church has planned to have four public baptism celebrations per year, two beach baptisms and two outdoor events on campus.

Brumback said the excitement and new life the church is experiencing is testament to the goodness of God and the resilience of His people.

“What we’re seeing at the church is the result of a willingness to stick together,” he said. “There is no secret formula, we must preach Jesus and leave the results to God.”

“God has done all of this,” he proclaimed. “He is the hero of the story.”