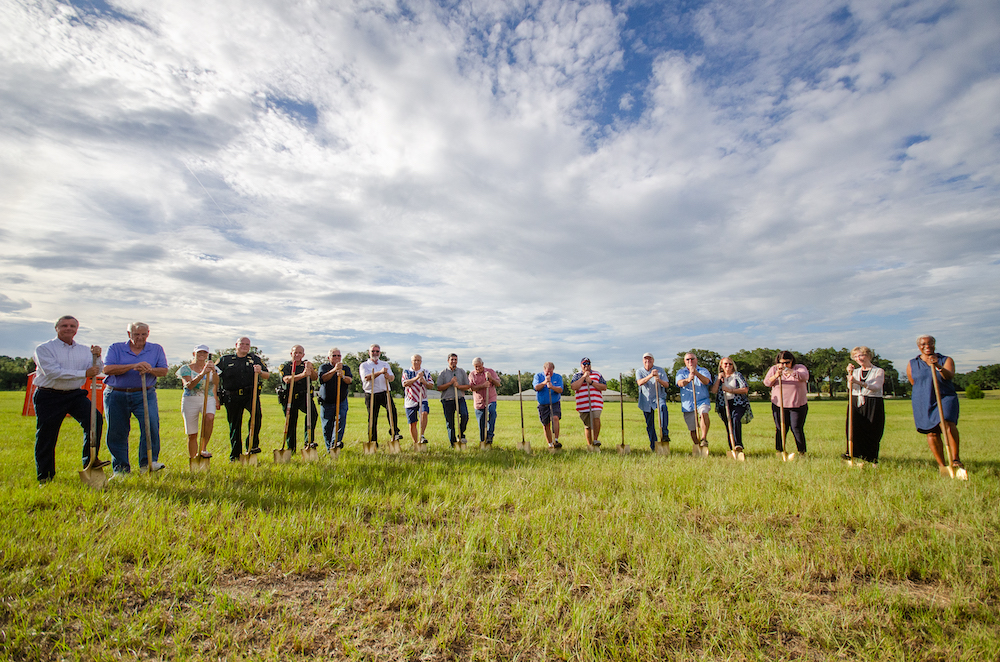 Pictured Above: The groundbreaking ceremony for the new church facility for First Baptist Church of Dunnellon was held July 2.

Just as First Baptist Church of Dunnellon has been sinking roots in its community for close to 125 years in ministry and witness, so it is breaking ground to reach future generations for Christ.

On July Fourth weekend, the church held a groundbreaking ceremony, including a gospel sing and a community fireworks display, to celebrate the beginning stages of construction of a larger church facility, which will allow its school, Dunnellon Christian Academy, to expand at its current location.

The new facility will be located on 38 acres less than a quarter mile from the current church building. To accommodate expected community growth, the new building will be about 27,000 square feet, almost double the size of its current 14,000 square feet.

“In seeking God’s will, you will often discover what is not God’s will,” Pastor Russ Randall said, adding that choosing the right piece of property for this project was challenging with several different parcels up for consideration. He even admits this parcel was not his first choice.

“We’ve known for a long time that we were outgrowing our facilities. A lot of discussion, thought and prayer went into this project. We tried to envision what this community will look like in 50 years. If we have done our job well, we will have put the next generation and the next one in a place where they can do ministry to what the community looks like then.”

According to Randall, who has served the church since 2010, this expansion has been in the works for more than 10 years.

The July Fourth event, he said, “was a great time to be reminded of the blessings God has given to us, not just as a church but as a country as well. It was very well attended, and we’ve already been asked if we can do the fireworks again. We’ll consider it. The piece of land is certainly conducive to doing it.”

The new church building will be a modern multipurpose facility geared toward corporate worship, but can also be used as a basketball gym, with classrooms surrounding it. One room will serve as the church’s fellowship hall, but it will also be available for community meetings and events throughout the week.

Randall envisions large athletic fields on the new property, with hundreds of children and their parents gathering for games on Saturday mornings as part of a youth sports program.

“We want to love on the community and provide opportunities for the community to come together with the ultimate purpose of sharing the gospel of Christ with them,” he said.

Once the new facility is complete, Dunnellon Christian Academy will then expand into the current church building. The school has a current enrollment of approximately 210 students in K-3 through eighth grades.

“We’ve watched that ministry really grow,” Randall said of the school, which started in 1983. “It’s an opportunity to share Christ with boys and girls, and it’s one of our greatest ministries.”

Future plans, with no set timetable, call for a second phase, which would include the construction of a second building to house a high school on the campus.

First Baptist Church of Dunnellon, in Marion Baptist Association, was established in 1899, and the new facility will be the third for the church. Its current building was built in 1967. Funding for this project, expected to be complete in early 2024, came from the estate of a church member who wanted the funds used for this project.

“He knew what our plans were and wanted to be a part of encouraging the community in this way,” he said. “We want to be faithful in using this money not to just build a building but to share the gospel.”