Next Generation Catalyst Billy Young welcomed guests to a panel discussion of the Florida Baptist Convention’s new initiative Write Beside You, an intentional effort to partner every public school in Florida with a church.

So Green has challenged every Florida Baptist church to adopt a school near them. Churches can be equipped with resources to help them know how best to partner with schools through the Write Beside You initiative. Church leaders gathered this summer to find out more about how they can get connected with a public school and were able to hear from the Urban Impact Initiative, which has a goal of seeing every public school in the nation partnered with a church. 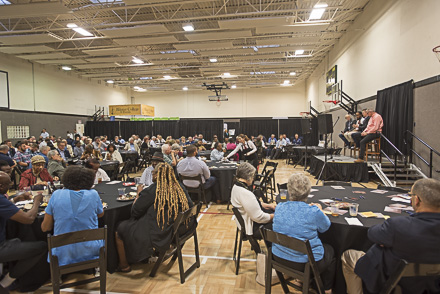 Young facilitated a panel discussion with three ministry leaders who are currently partnered with schools in their communities. David Tarkington, pastor of First Baptist Church in Orange Park, Corey Sanders, pastor of The Movement Church in Homestead and Phillip Whitten, director of engagement for One More Child, all have established relationships with public schools. Young took the opportunity to ask these pastors some questions about how the partnerships got started and how it’s working.

Young: How did you get started?

Tarkington said he is blessed to live within a school district that is very open to church involvement. He said he came to the principal, who wasn’t a believer, and was very honest with her to tell her that they wanted to serve her school and were not looking for anything in return. “I’m not trying to build a relationship so I can find a sneaky way to put VBS flyers on the front desk,” he said. “If we’re going in to build numbers it’s disingenuous and marketing.”

Young: What are you doing with your school right now?

Whitten said Idlewild Baptist Church has partnered with One More Child to serve area schools. They started by having a meeting with school district leaders and asking them where they could best be used. The district partnered them with a Title I school, taking it from an F school to a B school over the course of seven years. They adopted willing classrooms, mentored kids, provided school supplies and provided meals through a backpack feeding program.

Young: How has it benefitted your church?

Sanders said the benefits to the church won’t be in increased numbers or tithes but in relationships built. He has seen families they’ve connected with at school come to a movie night event the church hosted. He said there are not often immediate benefits but the deepening relationships with community partners has been a blessing.

Don’t forget to find out more about Write Beside You and how your church can get involved!