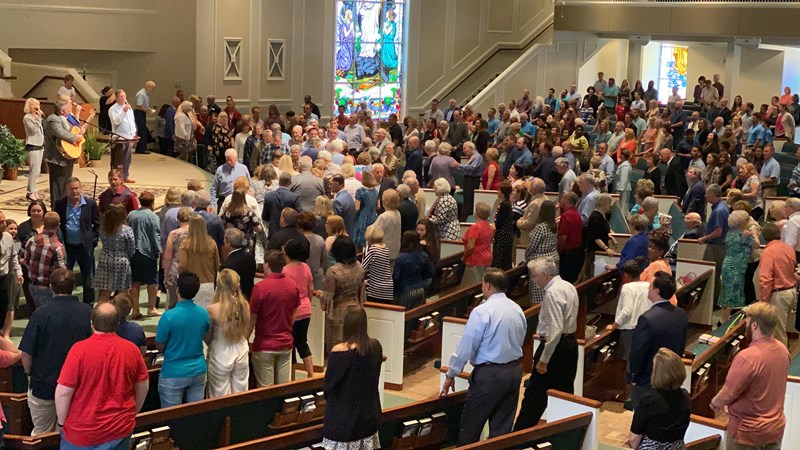 “The Cooperative Program is undoubtedly the best way to reach the world for Christ,” pastor Ronny Raines told Baptist Press. “This was a congregation who knew that. They just needed to see a way to support it.”

The Cooperative Program is the way Southern Baptists work together to advance the Gospel in state Baptist conventions, across North America and throughout the world.

Bradfordville First was a church that had gotten bogged down in debt, the pastor said. Sixty percent of the offerings each month was needed to cover the debt from a previous building campaign. The pastor had left. The three vocational staff members had left. The first pastor search committee was having a hard time finding a candidate for pastor.

“Things weren’t good, as you can imagine,” said Jim Overall. A Bradfordville First member for 11 years, Overall is a deacon and Sunday School teacher. He and his wife had been drawn to the church when they moved nearby because it “was a beautiful building and the general make-up of the church fit our age group,” he said. Over time he saw a church that because of its indebtedness had gotten caught up in its own needs.

But hope and a zeal for missions flickered. Church members increased CP giving from zero percent in 2013 to 1 percent in 2014, Raines’ first year, and 2 percent the next year. Three penny-pinching years later, it was 4 percent.

After turning down the first pastor search committee, Raines said yes when a second committee contacted him.

“The mood of the church had changed,” he said. “My pastoral background deals with church revitalization, helping churches turn around. I’m Southern Baptist by heart and by choice. I believe in the Cooperative Program and what we’re doing in the Southern Baptist Convention.

“I told them I think the Cooperative Program is the best missions strategy in the world. Because of CP we’re able to partner with 47,000 churches to send missionaries and the Gospel around the world. That’s it: We can do more together than we can ourselves.”

Raines’ words stoked the church’s missions flame. So did visits to the church from some nationally-known Southern Baptists: Fred Luter, former president of the SBC; Chuck Kelley, then-president of New Orleans Baptist Theological Seminary; Kevin Ezell, president of the North American Mission Board, and others.

“They were able to tell how our Cooperative Program giving is making a difference,” Raines said. “Our giving increased as our CP giving increased, and we’re also seeing spiritual growth and numerical growth.”

Today, a growing number of people participate in Sunday morning worship both in person and online.

“Also what we’ve been doing, when I go to the SBC annual meetings, we’ll take at least 10 messengers from our church,” the pastor continued. “This summer we took 18 to [the SBC annual meeting in] Birmingham. It allows them to see and hear how our CP dollars are being used. That creates a culture of knowing our money is being invested in Kingdom work, and that’s been very helpful.”

At the same time missions giving was increasing, Bradfordville First members got hands-on involved in missions and ministry at home in Tallahassee, in North America and overseas. 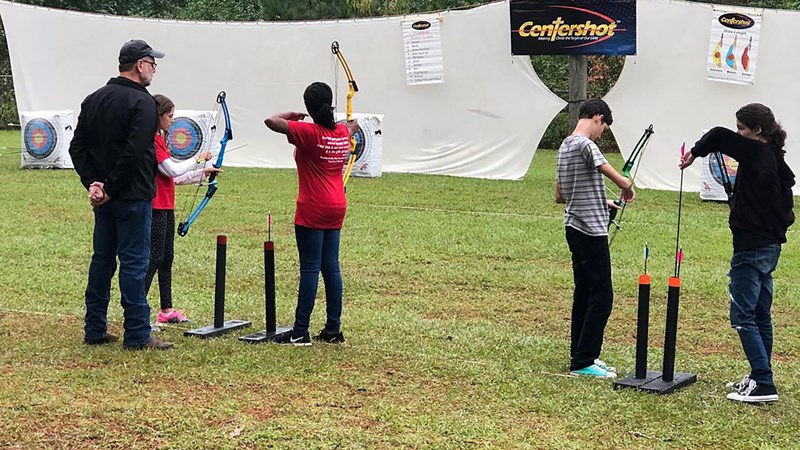 The church also hosts regular activities for local children, including golf and archery lessons, delivers breakfast to area businesses, partners with nearby schools, supports church plants and takes regular mission trips overseas. “Anything can be an opportunity to share the Gospel,” Raines said.

Raines led the church to bless bivocational pastors in the region and their families this Christmas. Each pastor and family received a personal visit from a Bradfordville member and gift cards to local restaurants and retail stores.

“We wanted every pastor to take his wife out for a date night, and we desired to help them buy Christmas necessities,” Raines said. “I love seeing our members loving outward and making a Kingdom difference.”

“We want to see our church family love God and love each other,” the pastor continued. “It’s a powerful witness to people when they see church people love each other. Part of that is getting outside the church and serving.”

Such outreach wasn’t possible when the church was bogged down by debt.

“I met with our administrator last week,” Raines said. “Our debt service is down to 23 percent of our annual budget in six years! On top of that we just built an administration building, and paid cash for it. We just had a ‘Thank offering’ for resurfacing the parking lot; we gave $170,000 total, and $152,000 in one day.

“The bigger story is that in the midst of that — debt being decreased, raising capital for a building and the parking lot — our mission giving has also increased,” the pastor continued. He led Bradfordville First to increase CP giving methodically, he said, from 1 percent in 2014 to 2 percent, 4 percent, 6 percent and in December, 10 percent.

“As their pastor, I say with conviction, “All the praise goes to Jesus,” Raines continued. “It’s impossible to out give the Lord.”