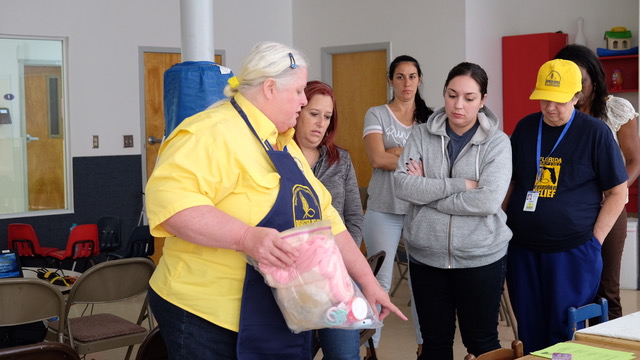 The Southeast Regional Center in Hialeah was a buzzing hub of activity on Saturday morning until early afternoon as more than 100 volunteers showed up to be trained in disaster relief.

“I think our churches saw the reality when the last hurricane came through and they couldn’t respond as effectively as they needed to,” said Al Fernandez, southeast regional catalyst of the Florida Baptist Convention. “Now they see the advantage of having a partnership with Disaster Relief.”

The day was split up into five sessions with returning volunteers attending two training sessions and new volunteers attending a general orientation and one training session. The sessions being offered included proper food handling, cooking in a borrowed kitchen, childcare, flood response, clean up and emergency response among others, with each class lasting about an hour and a half. Some volunteers received hands-on training.

Delton Beall, state director of Florida Baptist Disaster Relief, said that if Florida is threatened by a natural disaster “we have to stand down out of state responses to prepare for our responses here.” Florida volunteers still get called out-of-state during hurricane season if there is no threat to the state.

“We do get call outs and will respond during hurricane season. We had teams in Texas after hurricane Harvey until Irma [hit],” Beall said.

Teddy Martin, pastor of Iglesia Misionera Bautista, was among the pastors registering for the first time. He said that he did so because he saw the benefit of being able to physically help in times of need while bringing hope in the message of the Gospel.

There are four more training events scheduled until June for regions 4, 2, 1, and 5. There is no pre-registration but there is a registration fee of $25 for new volunteers and $20 for returning volunteers and an additional fee for mandatory background checks.