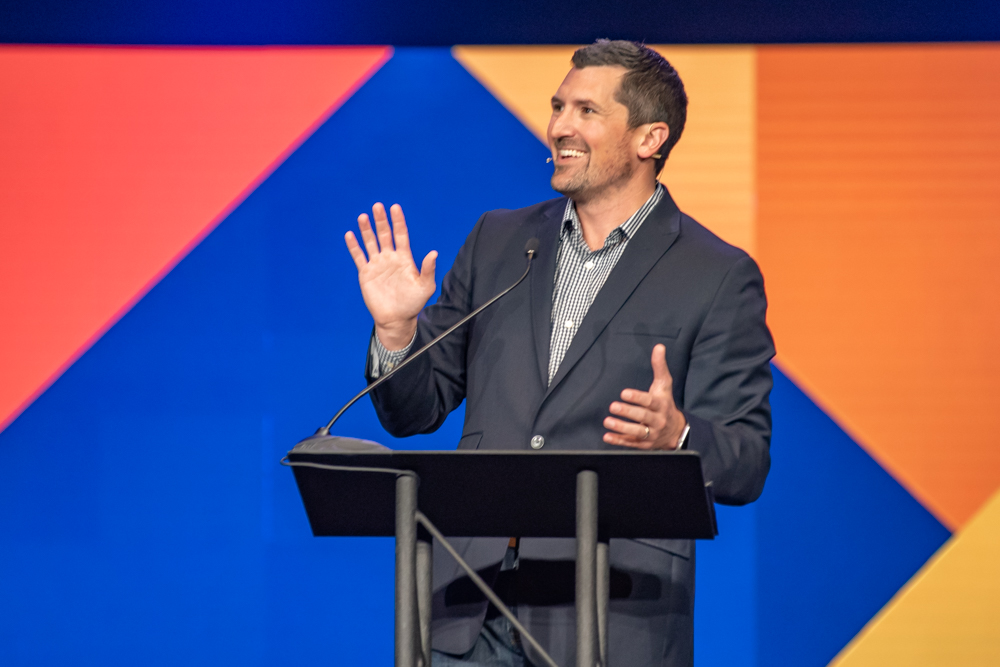 LAKELAND—As many church leaders in America are “losing their passion for ministry,” James Ross, preaching the Convention Sermon at the 2021 Florida Baptist annual meeting, suggested seven ways that these leaders can “lean” if they seek to “lose their lives for the sake of the gospel.”

Ross, lead pastor of The Church on Bayshore in Niceville, focused on Mark 8:34-37 and Philippians 1:27-30, as he challenged church leaders to be faithful to the Great Commission even when facing discouragement and frustration.

One, “lean into denying yourself instead of branding yourself.” When he attended his first Florida Baptist annual meeting in 2008, Ross, 26 years old and in his first year of planting a church, recalled being “excited to see how God might use me to make His name known. But, if I am honest, I was also excited for how He might make my name known.” He encouraged attendees to focus on John 3:30, “He must increase, but I must decrease.”

Two, “lean into giving yourself away instead of building yourself up.” He said that it is easier to “talk” kingdom-minded than to live kingdom-minded. A call to follow Christ, he said, is a call to “seek the kingdom first.”  He asked, “Are you really losing your life for the sake of the gospel?”

Four, “lean into faith more than fear.” He explained, “We cannot let fear guide us. …In a time when our country is as confused as ever about telling right from wrong, when people have more opportunities to connect but are lonelier than ever, when people have access to an unprecedented amount of information but are confused, we need men and women who are convinced that Jesus … is God, proclaim that truth boldly and show people what it means to trust Him even when there is uncertainty and fear attached to what He calls us to do,” Ross said.

Five, “lean into sanctification more than security.” Ross explained that God, “in His grace,” often slows him down to teach him a lesson.  Challenges, he said, are often “the vehicles through which God is growing me.” Also, during hard times, God often teaches other people through the person experiencing the difficulty, he said.

Six, “lean into the long haul over the short term.” Ross said many church leaders have given up or fallen into sin over the past several years, while others “have faithfully loved the people of God and proclaimed the word of God through a recession, culture shift and pandemic.” He encouraged Christian leaders not to grow weary because “God continues to build His church through imperfect people who endure.”

Seven, “lean into your status with God instead of your success for God.” Ross explained, “God’s people have persevered according to His promise. … Jesus is on His throne.”

“May our leadership be in response … to the fact that our name is in the Book of Life.”