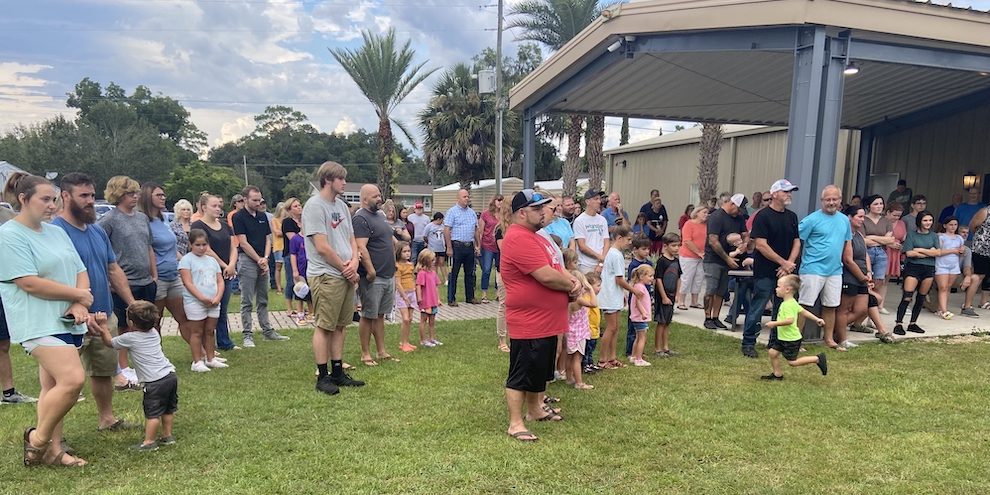 Pictured Above: Crosspoint Baptist Fellowship Church in Perry held a community prayer service on the same day that an arson fire destroyed the main office of its Point of Grace Christian School. “The theme of this service was – we have already forgiven this man in our hearts,” said School Administrator Randy Maubach.

God is making beauty of ashes from the fire set by an arsonist that destroyed the main office of Point of Grace Christian School  and its only bus.

That’s how school administrator Randy Maubach describes the fire set by an arsonist the week before school was to start in August. While the fire delayed school orientation, the school year began on schedule, and the repairs and renovations to the school offices are expected to be complete by early November, thanks to overwhelming community support. The school is part of Crosspoint Baptist Fellowship church in Perry.

Maubach said pledges of support and donations began coming in the day of the fire, including one pledge from a local business to pay for all the building supplies needed for renovations and repairs, and another pledge to replace the church’s old school bus, which was used for field trips. Damages from the fire are estimated at $100,000.

On the Saturday after the fire, about 50 people representing the community and six different churches showed up to assist in gutting the office space to ready it for repair. With the large crew of volunteers helping, the work was completed in about two hours.

“My initial thought was that it was going to take us six to eight months before we were up and running. But we’re probably within three weeks of being able to move back in,” Maubach said. “It’s really just the supplies that are holding us up.”

Police have arrested a man on charges of arson and say he intentionally set the fire at the school. Church officials say surveillance cameras show he tried to get into the church first, and when that didn’t work, he moved to the school.

The office building is comprised of four different offices, and the arsonist set a fire in each one, destroying the main office. Fire officials say setting multiple fires caused the fires to compete for oxygen, helping to reduce damages. The suspect also closed the main office door when he left, which also was beneficial.

Based on surveillance video, officials believe the fire was only burning about an hour before a teacher showed up early for work and reported the fire.

Despite the damages, Maubach said that school and church leaders look at this as a blessing for several reasons.

“We feel like this was an opportunity to show forgiveness,” he said. “We had a prayer service that night at 6 p.m. that was open to community. The theme of this service was that we had already forgiven this man in our hearts. That’s our responsibility as Christians.”

In fact, members of the church put together a letter-writing campaign and wrote letters to the arson suspect, letting him know he was loved and forgiven.

A second blessing was how the community came together and responded, he said. Donations of more than $60,000, in addition to the building supplies donation, helped replace office furniture, computers and equipment.

The third blessing was the beauty from ashes that occurred from being able to redesign the office space.

“We were never comfortable with how our offices were set up,” he said. “We’ve used this as an opportunity to start from scratch and get this how we want it laid out. We see God’s hand in that. We were able to take something that was bad and get the good out of it.”

Once the renovations are complete and the office is reopened, the church plans to dedicate the building in memory of two students who died in the past year.

As for the bus, Maubach said a church member with automotive expertise is helping select a used bus replacement for consideration. They are looking for a traditional school bus that can seat around 50 passengers.

“Our bus was a typical old Baptist church school bus. It was probably 40 years old, and it was affectionately called ‘Dragonfly’ because it would drag up one side of a hill and fly down the other,” he said with a laugh. “We want to get something that will be reliable for us.”