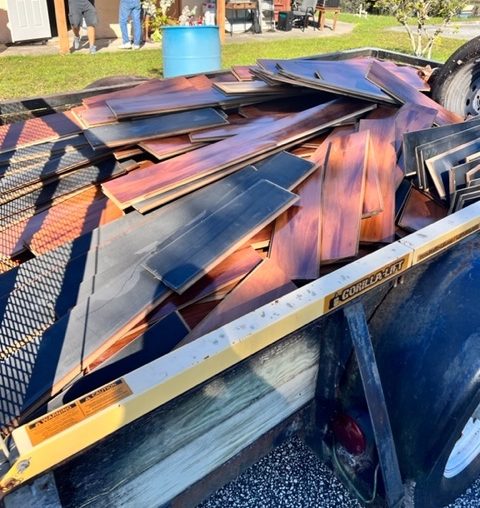 A day after Ian dropped more than 19 inches of rain in the Daytona Beach area, the pastor and members of City Light Church in Port Orange sprang into action to help fellow members and other churches dealing with significant flooding.

‘It’s been exciting to see what God is doing through His churches.’

“It’s just been amazing,” said Steve Loy, associate director of missions for East Central Baptist Network. “That’s part of what we are here for – churches helping churches. It’s been exciting to see what God is doing through His churches.”

Josh Peoples, pastor of the new church plant City Light Church, said that the church helped its own members first. The homes of about five or six church families had flooded. While some church members assessed the homes, others began cooking meals for those impacted. They prioritized their list and began helping the neediest first, like widows and widowers.

When volunteers went to work at a member’s flooded home, they also took food for them, with extra to share with neighbors.

Because cell service was down, Peoples found social media an effective way to get the word out to his congregation about where they would be working.

An Oct. 1 Facebook post stated: There’s no City Light Church service tomorrow. Let’s extend a hand out to our neighbors and we’ll extend a hand up to our Lord whenever we can return.

Church members met at a park to pray and then dispersed to various homes to work. They distributed sandwiches at the park and in the surrounding neighborhoods and offered to pray with people.

“Everybody was working in their yards. Everyone was accepting,” Peoples said. “They were overwhelmed and were open to talk about the gospel and open to prayers. It was a really neat thing. Some of our people were walking around and offering hugs. You could see people’s hearts melt just from being overwhelmed and the uncertainty of it all.”

Those social media posts led to his crew helping other churches in the area like First Baptist Church of South Daytona and Spruce Creek Baptist Church.

“That’s one of the strengths of being in the association,” he said, referring to East Central Baptist Network, which is comprised of Baptist churches in Volusia and Seminole counties. “Some of the guys from the association saw our posts and said, ‘Since you’re already out and working, can you add a few more to your list?’”

Peoples said they were happy to help, especially churches with older congregations like First Baptist of South Daytona, where everything except the sanctuary was flooded. The church’s education building, which included classrooms, the fellowship hall, the kitchen and the main office, received about a foot of water, damaging all the carpet, lower bookshelves and their contents, cabinets and 50 years of church history.

“City Light Church came in and really helped us a lot,” said First Baptist Pastor Charles Mims. “Every day they came in, tearing down shelves, pulling out carpet and more. We’re so grateful. We know God sent them to us.”

To continue this relationship, Peoples said the two churches are holding a joint service at First Baptist Church South Daytona on Oct. 23. They’re calling it Better Together and offering a free breakfast for the community.

“We told them, ‘You guys take the Sunday off. We’ll come in, and I’ll preach. We’ll do the music, do the kids’ stuff and make a breakfast for the community.’ Hopefully we’ll see a couple hundred people from the community take advantage of a free breakfast.”

Peoples said he’s going to preach about what it meant when Jesus said in Matthew 11:28 that He had come to all who are weary and heavy laden and need spiritual rest, and he prays God will use his sermon to encourage those impacted by the storm.

The crew removed damaged wooden flooring in offices and removed downed trees and debris at Spruce Creek Baptist Church. Another church, First Baptist Church of Osteen in Volusia County, opened its doors to displaced residents who had to move from Daytona’s Ocean Center.

“Our hope is that this will strengthen the bond in our communities,” Loy said. “And everyone will see how churches rose up to help people.”

As a new church plant that just started services in August, City Light Church has tried to infiltrate the community and offer help in a variety of ways, Peoples said.

“That saying, ‘People don’t care how much you know until they know how much you care,’ it’s so true,” he said. “I don’t want to be the pastor that’s constantly telling people to come to my church, but then we don’t come to them whenever there’s a disaster or something going on. We want to show the people in the city where we minister that we really do love them.”

‘One of the silver linings through catastrophes is that God uses it for good.’

As church members ministered and worked in various neighborhoods, some people they encountered had

questions about God’s love and God’s plan when something like this happens. Peoples said this created great opportunities for gospel conversations.

“I hate that we are more receptive when there are catastrophes, but I’m thankful that God still uses this,” he said. “I think that’s one of the silver linings through catastrophes is that God uses it for good.”