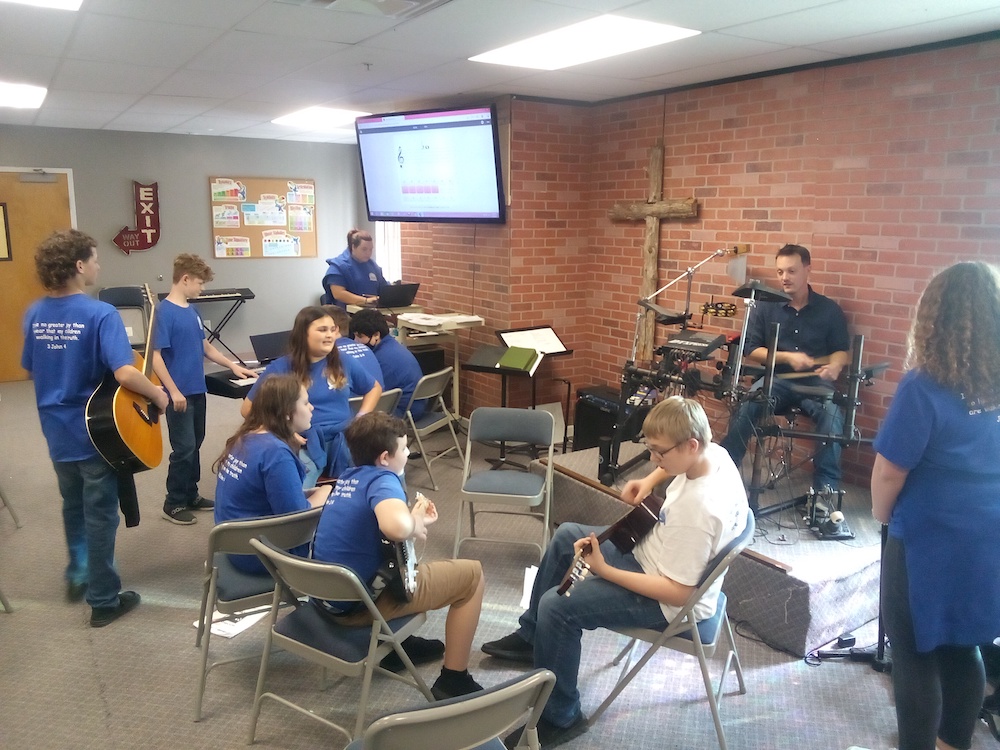 SILVER SPRINGS–When Building Bridges Academy opens for its second year this fall at Ocklawaha Bridge Baptist Church in Silver Springs, enrollment is expected to almost triple from its first year.

The growth in both enrollment and staff is a great indicator that the school is having a positive impact on the community, said Jared Buchanan, pastor of the church and former principal of the school, which ended the year with 13 students and has a goal of 35 for the fall.

“This school is such a blessing to our community and to our church,” he said.

Part of the appeal of the school is its location. It’s the only middle school for miles and miles. Students who live in the rural area of the Ocala National Forest would typically have to ride a school bus more than an hour to and from the nearest public middle school.

And then there’s the free tuition to this private school available through scholarships from the Step Up For Students organization in Florida. The state-approved non-profit scholarship funding organization offers scholarships to families of four with an annual income of $111,000 or less.

Step Up utilizes private donations that are allocated by the state of Florida to give parents more choice in their children’s education.

Timing also played a role, Buchanan said, as coming out of a year with COVID, families were reassessing their children’s education and their teachers.

“We could not have started the school at a better time,” he said.

But getting it started was a little challenging. Despite the various obstacles, the process helped strengthen the faith of church members as God provided what was needed every step of the way.

The church already had an educational wing of classrooms and a gymnasium thanks to funding from a large endowment of money from previous years, but the facility was not being used. To open a school, the church had to request a zoning change, which took months. It had to register with the state Department of Education as a school, which required fire and health inspections, among other requirements.

To become a Step Up provider, the church had to get a letter of credit for $2,000 per student for a total of $30,000. This money would have to sit in escrow as collateral for receiving state funds. That’s a lot of money for a small church. But when Buchanan presented the need to the church, a member wrote a check. That was a huge blessing, the pastor said, but none of those funds could be used for actual start-up costs.

That’s where First Baptist Church at The Villages came in. Buchanan was advised to check with Pastor Bob Perry there about assistance in raising start-up funds. Nothing came from that initial call, but about an hour later a couple met with Perry in his office and told him they had extra money they’d like to give to a worthy gospel cause. When he told them about the school, the couple began to cry and asked that $13,000 be donated to the school for start-up costs. The church also donated $5,000.

The school opened in August 2021 thanks in part to its well-known teacher, Robin Gwin, who previously worked as a fifth-grade teacher for nearby East Marion Elementary. That made it easy for students to follow her to this new middle school.

“God led us to this teacher. Without Robin Gwin, we would not have a school,” Buchanan said.

Buchanan started as the school’s principal but turned those duties over to Aaron Brindle in January. Brindle, a professionally trained architect and former missionary with the International Mission Board, started last fall as the volunteer physical education coach but also served as the school’s part-time principal and chapel speaker the last half of the year. Many other church members also volunteer at the school, helping with office duties and student electives like cooking, crafts and fishing.

As school principal, Brindle said he will be working to set both the school and its teachers up for success. He’s tasked with making sure the school is in compliance with both the Florida Department of Education and Step Up, which includes verifying funds are being used properly, attendance records, maintenance of facilities, teacher qualifications and more.

Brindle said one of the school’s strengths is its faculty.

“You won’t find more competent and committed educators anywhere,” he said. “They love the Lord and buy into the mission of the school.”

Ocklawaha Bridge Baptist Church has been around for 167 years and is very much a part of the community, he said. Parents can take heart in knowing the school is under the church umbrella.

“The school is an extension of the church, and that spiritual influence will never be lost. We really are a church school,” Brindle said.

Brindle said his favorite part of working at the school has been getting to know the students and witnessing transformation in their lives.

One of the school’s students was recently baptized, and her family joined the church. Several other families are now attending the church. That’s the type of transformation the church hoped to see in starting the school, Buchanan said.

“It’s having the effect we wanted. It’s been a huge undertaking, but well worth it! We’re already talking about high school,” he said, noting success looks like 15 to 20 students per grade. “We’ve got all the space we need.”

Buchanan believes this school model using Step Up funds is a great one for other churches in Florida to emulate as a way to reach their communities.

“It’s been such a faith-strengthening year in my life,” he said. “There were plenty of naysayers, but in the end it was amazing to watch the Lord come through in the ninth inning. If it were not for God’s hand, this would not have happened.”