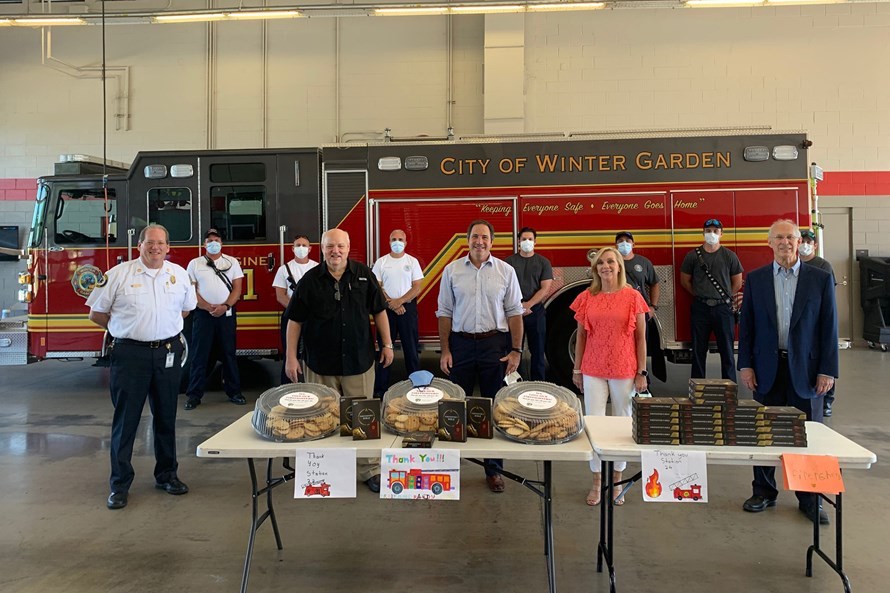 WINTER GARDEN–More than 70 firefighters were doused with support last week as members of First Baptist Church in Winter Garden found creative ways to celebrate their local heroes during a pandemic.

On May 3, after watching a livestream worship service from home, church members drove by the two First Baptist Winter Garden campuses to drop off baked cookies and homemade cards illustrated by their children. Hanging outside one of the churches was a large banner that read, “First Baptist Loves Our Firefighters.”

The following day pastors Tim Grosshans and Ken Mann delivered the cookies and cards to their local fire station. They also presented Fire Chief Matt McGrew with Chick-fil-A gift cards and copies of the CSB Firefighter’s Bible to distribute to the volunteer and full-time firefighters who serve in one the three Winter Garden fire stations.

Mann said the gesture was timed to coincide with International Firefighters’ Day May 4 and was meant to express thanks to public servants who are going the extra mile to keep the city safe during COVID-19.

“We’ve honored other professions in the past,” Mann said. “This year, we specifically thought about how we could serve firefighters because of all the extra work they’re putting in as first responders during this pandemic.”

Before delivering the gifts, the pastors wrote small messages inside each of the 72 Bibles. Mann said the church chose the Firefighter’s Bible from LifeWay Christian Resources because it contains features such as “A Fireman’s Prayer” and articles written by firefighter chaplains on topics such as post-traumatic stress disorder. The Bible is part of a series that also includes Bibles for EMS professionals and law enforcement officers.

“Firefighters, as with all first responders, are used to being heroes to their local communities, but even more so during a pandemic,” said Andy McLean, LifeWay’s director for Bibles and Reference. “I pray the custom prayers and features inside these Bibles speak to these brave men and women and draw them into God’s Word to discover the greatest hero of all–Jesus Christ.” 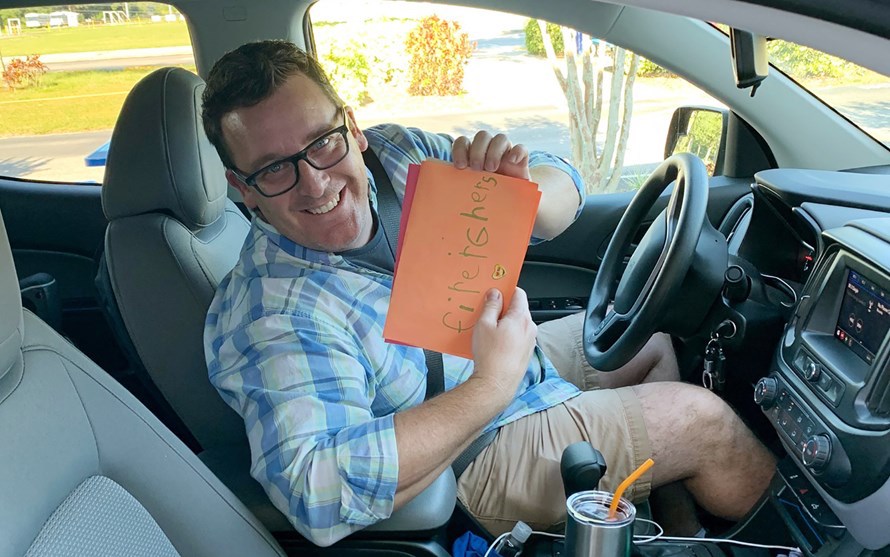 Before the church made plans to observe International Firefighters’ Day, Mann met with several church members who serve as firefighters to ask how the church could best honor its community heroes. Mann said the church then worked hard to involve all its people — including children — while still observing social distancing guidelines.

The church used social media and announcements during its online services to encourage members to bake cookies in their own homes while children made cards. And throughout the week, members were encouraged to drive by the fire stations and honk twice to show their support.

“That way, they would know we were honking specifically to honor and celebrate them,” Mann said.

The Winter Garden Fire and Rescue Department provides joint response services with the Orange County Fire Rescue Department, which, within 24 hours of International Firefighters’ Day, had reported on Twitter responding to a heavy fire in a home attic and a train engine that had gone ablaze. No injuries were reported for either incident.

“Some of the gear firefighters are having to put on now due to COVID-19 is stuff they would have only used once in a blue moon before,” Mann said. “Now, every time they go out, they’re having to put on a special apparatus just in case a person has COVID-19.

“Our firefighters are putting in a lot of extra work, so we wanted to make sure and honor them and let them know how much we appreciate them for what they’re doing right now.”