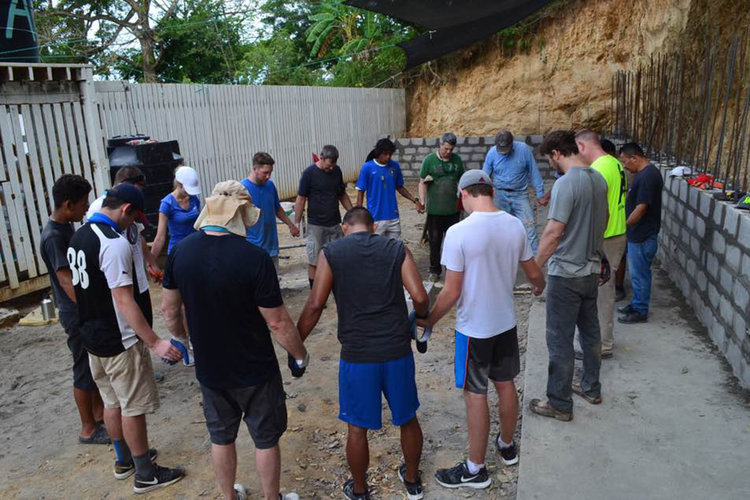 “When it comes to missions, there are senders and there are goers. I was a sender,” said Theresa lmbach. That was until she met with Henry Zittrower. Henry shared with the Missions Team at Chets Creek the plight of the people of La Colonia in Roatan, Honduras. It was the story of Hondurans living on an island but dying of thirst because they had no access to clean drinking water.

Henry wanted to provide clean water and the message of hope in Jesus Christ to the community of La Colonia. His story was so compelling and the mission so urgent Chets decided to send a team down in 2005 to help. The leader of the team? The self-proclaimed “sender” Theresa.

Over the next five years, Chets worked alongside Henry and his ministry, Living Water for Roatan (LW4R), to build wells in the community. With worn and washed out dirt roads, walking and carrying water from the wells was challenging. Mission teams ran PVC pipe to help distribute water from the wells to people’s homes. But there was still a need for more.

Theresa said, “We didn’t know the solution, but God did.” With the help of the government, LW4R built a 65,000-gallon water tank. That meant additional water that didn’t have to be carried or pumped up the hill.

Over five years, the mission teams from Chets got to know people in Roatan and began building relationships that led to new partnerships. In 2010 we connected with Mike and Kerry Tichi. It was out of their desire to use sports and education to make a difference in the lives of the Hondurans in La Colonia that Care4Communities (C4C) was born.

Kerry taught English and Mike would mentor kids through soccer. When Chets got connected with C4C, the team was ready to help however they could. The first thing they did was purchase land and clear the bottom level to put in a soccer court. Mike and Kerry put rules in place for any kid that came: there would be no bad language, no fighting, and they had to be respectful of the leaders.

In order for kids to play at the court they also had to bring ten 16-ounce bottles filled with sand with them. Those bottles were then used to build the court wall. The soccer court was the huge draw for the community and it brought kids in.

In 2o12, Ron and Jamie McDonald stepped into the role of full-time missionaries at C4C while the Tichi family returned to the states. Jamie taught the English classes while Ron mentored the court boys. Chets continued to send teams and build relationships in La Colonia.

During one of those trips, Theresa’s husband, Chris, realized there was a need for a larger school. He met with the International Mission Builders (IMB) in 2015 and asked if they would be willing to help put up a school building in Roatan. They said yes and got to work. The team brought supplies over from the mainland on a ferry boat and within four days the exterior of the building was put up.

Having a larger, usable building meant the English portion of the ministry expanded tremendously because there was now space for teaching more students. The English schooling provided by C4C is the only free program on the island. The biggest industry in Roatan is tourism so learning English is incredibly important. It means more opportunities and chances to succeed.

The English classes and soccer court ministry are ways to get kids in the community involved but at the heart of it all is sharing the gospel. Chris said, “You’ve got to show them Jesus before you can share Jesus.” That‘s exactly what the missionaries and mission teams want to do.

Coming Back to Give

Over the years, many of the kids who have gone through the programs have risen up to become leaders and mentors for the younger kids. And that’s the goal. C4C is always asking the question, “How do we get this ministry to be Honduran led and Honduran run?” The Hondurans live there and the Americans are just passing through. One of The great success stories of Honduran leadership is Hector. Theresa describes him as “an amazing young man.” Hector went to seminary and plays the role of mentor for many of the court boys. He is constantly telling every kid that comes to the court “l love you and God loves you.”

Earlier this year Hector took on even more of the mentor role as Ron and Jamie left Roatan to follow a different call. Through partnerships with a local church, La Iglesia Bautista Communidad de Fe, and LW4R, other Hondurans have assumed leadership roles in the school and on the court. Pastor Oswaldo oversees the property and mentors Hector. There is also a Honduran English teacher, Liz, from the church who now teaches at the C4C school.

A Chets team was there in March when a lot of this transition was taking place. The team installed synthetic turf on the court, a huge answer to prayer. There are now more kids than ever before.

As exciting as it is to help complete projects, “This isn’t about building fences, it’s about building relationships,” Chris said. Because of the LW4R and C4C partnerships that we have built over the years, there are opportunities to continue investing in the kids of La Colonia year after year. “We know them. They know us. We know their stories. We love seeing them year after year,” said Chris.

One of those stories is Jonathan’s. When Theresa first asked Jonathan what he wanted to be when he grew up, he told her he wanted to rake leaves or clean rooms at a resort. There wasn’t any hope to dream of anything more. Then the missionaries and team members at C4C began asking him what God created him for and what he was passionate about. They invested in him, mentored him, loved him, and told him he was made in the image of God. Jonathan now dreams of becoming a doctor and was recently accepted into medical school. When the community looks at kids like Jonathan and pushes them aside, C4C is the only consistent thing telling them they are loved. With every trip there are more stories of changed lives just like Jonathan’s.

It’s exciting to reflect on what God has done and is doing in Roatan, Honduras. Theresa said, “It’s a great place to do ministry. The world comes to Roatan. If you can reach Roatan, you can reach the world.” And that’s our mission at Chets – to help others know God and be changed by Him in a way that will change the world.