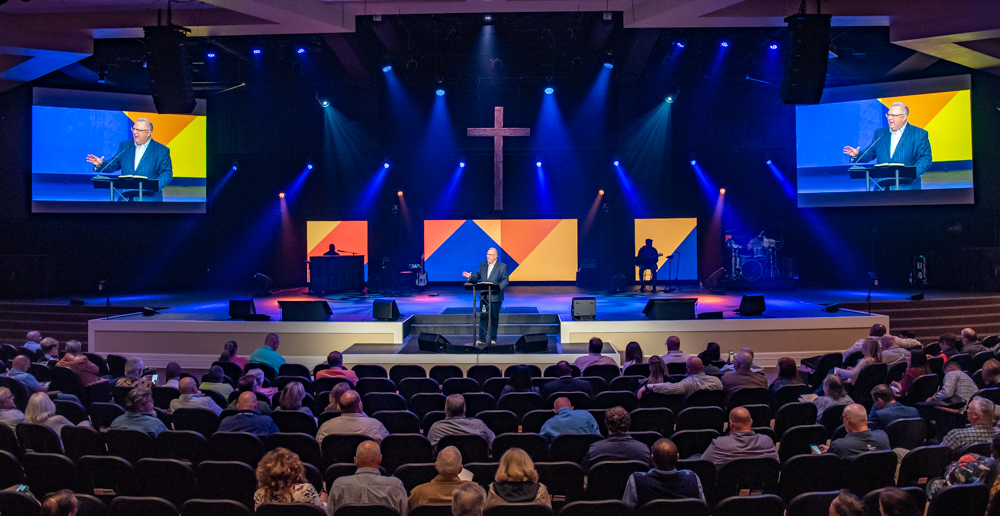 LAKELAND–To highlight Florida Baptists’ commitment to moving forward with the gospel, several pastors and church leaders shared personal stories on each of the six focus areas of Challenge 2025 during the 2021 Florida Baptist annual meeting.

Interviewed by Tommy Green, Florida Baptists’ executive director-treasurer, leaders described how the state convention has been “right beside” pastors and churches as progress has been made in church planting, church revitalization, baptisms, missions engagements and giving to the Cooperative Program and Maguire State Missions Offering.

Over the past six years, Florida Baptists have planted 350 churches, Green reported, with 55 churches planted so far in 2021, even amid pandemic restrictions. The Florida Baptist Convention works in partnership with the North American Mission Board through Send Network Florida in its church planting endeavors.

Jackson Voltaire, lead pastor of Grace Connection Baptist Church in Broward, reported, “God has graciously opened doors for us,” as he described how his church recently has worked alongside two church planters, Loti Marc and Jean Heude-Feron, to launch two churches that meet in a donated building. One of the church plants holds it services in English, and the other church plant worships in Creole.

Cam Triggs, lead pastor at Grace Alive Church in Orlando, is leading his church to plant multiple churches, including One Family Church in Apopka, pastored by Melo Sauval, and Remnant Church in Leesburg, pastored by Ryan Armstrong.

“We’re not just going to plant one church. We want to be a sending church. The Great Commission is a call to plant churches,” Triggs said. “Central Florida is an unreached region. We can only further the mission if we partner together.”

Celebration Church in Tallahassee, with lead pastor David Emmert, is launching Celebration Church en Espanol, planted by John Lizarazo. Emmert said his church is committed to planting a number of churches over the next few years.

How many churches need to be revitalized? “All of them!” answered Green. Four pastors recently shared their church revitalization stories.

Magaha described the assistance he has received from the Florida Baptist Convention during the initial revitalization phase as “indispensable.”

Journey Church in White Springs, under the leadership of Danny Bryant, was gifted with a building after having met in a high school. Florida Baptists provided financial resources to remodel the bathrooms in the building; the church is now growing and needs to add space for children’s ministry.

North River Church in Parish, pastored by Michael Kennedy, began about 10 years ago. In March 2020, as the pandemic started, the church was “evicted” from the school where it had been meeting. Although the church had started building a church, it had no seating. Soon, 350 chairs were donated, and the church has now filled all 350 chairs in each of its two Sunday services.

Moultrie Baptist Church in St. Augustine with Pastor Johnny Weldon is in the process of long-range revitalization development. God is working in the hearts of church members, Weldon said. “We are going to reach this community.”

In a short video, Florida Baptists celebrated individuals making professions of faith in Jesus Christ and being baptized. From rural outposts to large cities—in the ocean or a lake or a horse trough or a traditional baptistry—new Christians are celebrating their new birth in Jesus Christ as they are raised from the baptismal waters to walk in new life.

Green reported that 10.5% of all baptisms in the Southern Baptist Convention are through Florida Baptist churches. Florida Baptists lead the entire SBC in baptisms.

Florida Baptists work alongside their partners in Baptist Collegiate Ministries to reach more than one million college students in the Sunshine State with the gospel and to disciple them to share their Christian witness locally and throughout their communities and the state, nation and world.

Pastor Paul Purvis, at Mission Hill Church in Temple Terrace, partners with BCM at University of South Florida, which has students from 150 nations on campus. “We see University of South Florida as our closest and greatest mission field,” Purvis said. This fall, his church has seen college students make professions of faith each Sunday. “We encourage students to serve and make a difference,” the pastor said.

North Central Baptist Church in Gainesville partners with BCM at University of Florida. BCM director Eddie Gilley said that he encourages each student to spend two weeks outside of the United States to share the gospel. Pastor Calvin Carr stated that many UF students at his church are involved in a variety of ministries, such as leading conversational English classes or befriending internationals. “We are grateful for our partnership with Baptist Collegiate Ministries,” he said.

Four Florida Baptist pastors shared why they lead their churches to support the Cooperative Program, Southern Baptists’ unified plan of giving through which cooperating Southern Baptist churches give a percentage of their undesignated receipts in support of their state conventions and the SBC missions and ministries.

Established in 1925, CP is “still the best way” to fund missions, seminary education and other denominational priorities, Green said. Florida Baptists give 51% of all CP receipts to the Southern Baptist Convention, keeping 49% within Florida for ministry and witness efforts statewide.

Russ Randall, pastor of First Baptist Church in Dunnellon, said he leads his church to live with its hands “wide open” in generosity. “We can have a godly influence by simply giving,” he said.

Ted Traylor, pastor of Olive Baptist Church in Pensacola, said, “We can do more together than apart,” adding, “You can’t out-give God.” He believes it is important that church members know that part of their financial gifts to the local church are being given to help Southern Baptists minister and witness throughout the world.

Alan Brumback, lead pastor of First Baptist Church in Naples, tries to educate his church members about CP by telling them compelling stories of lives that have been changed by Jesus Christ through the ministry of Southern Baptists. The International Mission Board trustee said, “People don’t want to give to an institution but to a movement. How is what they are doing (through gifts to CP) making a difference?”

Aaron Burgner, pastor of Lakes Church in Lakeland, said, “I have a huge heart for missions,” and CP is a practical way to fund North American and international missions efforts. CP is a “pathway” and “game plan,” he believes.

Green: God reminds Florida Baptists ‘Is there anything too hard for me’