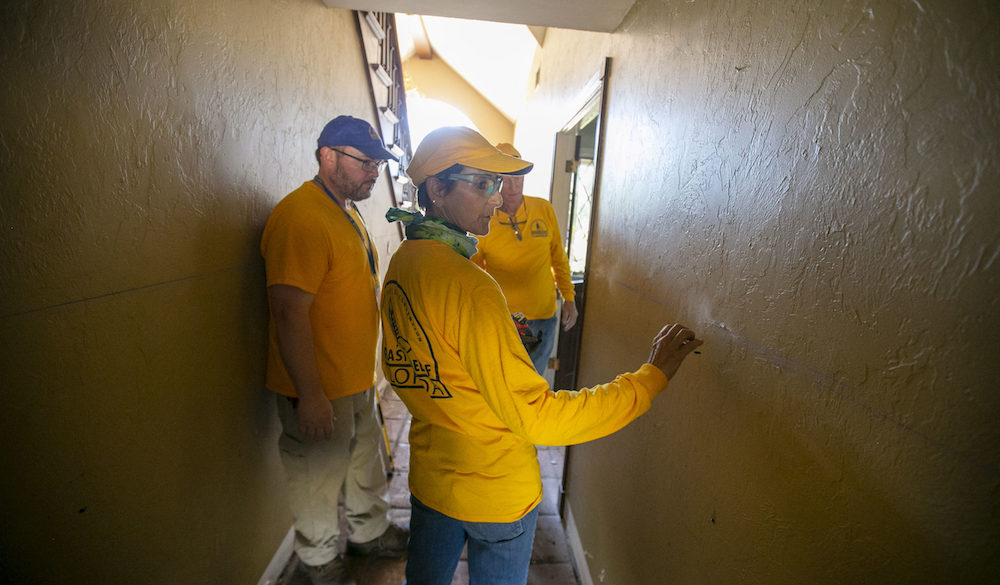 PORT CHARLOTTE – Any time a major storm system threatens the continental United States, the antennae of thousands of Southern Baptist Disaster Relief (SBDR) leaders and volunteers go up. They prepare a response that has required year-round preparation and readiness.

Since Hurricane Ian made landfall as a Category 4 storm Wednesday, Sept. 28, SBDR volunteers from across the U.S. have provided tens of thousands of meals and begun serving dozens of homeowners, with those numbers expected to increase as their teams develop a rhythm.

Ten SBDR response sites capable of sending out dozens of volunteer flood recovery teams each day and preparing up to 160,000 meals a day don’t just happen.

David Coggins is disaster relief director for the Florida Baptist Convention, one of 42 Southern Baptist state conventions, each with a person filling a role similar to Coggins’s. When disaster strikes, the affected state’s director takes the lead in coordinating the on the ground response.

“We didn’t know where it was going to hit,” Coggins said. “I started selecting sites all along the coast, church locations, and identifying those and trying to start make some initial contacts knowing that somewhere along that coast from Fort Myers all the way up to Tampa, we were going to have to have some locations pinpointed.”

A track record of more than 55 years of disaster relief efforts has earned SBDR a seat at the table for emergency operations in both state and federal governments as their national network enables them to marshal hundreds of trained disaster relief volunteers after a crisis event.

Once Coggins laid the groundwork with the state’s emergency operations center in Tallahassee and had a liaison in place at the beginning of the week, he and one of his volunteer teams staged near Lake Yale, north of Orlando, where they rode out the storm.

By Friday, two days after Ian’s landfall, their volunteer team was at Murdock Baptist Church in Port Charlotte setting up equipment and establishing a command center.

Coggins had also identified locations where other SBDR teams, many of them from out of state, would set up and begin receiving resources for their response. So far, 17 different Southern Baptist state conventions have mobilized SBDR volunteers.

“Driving in there was a lot of water,” Coggins said. “Of course, some of the barrier islands, Sanibel and some of those barrier islands at Fort Myers Beach and others took the brunt of the winds and storm surge.”

Every hurricane response is unique. Ian brought its massive storm surge to bear on Fort Myers and Cape Coral where the Caloosahatchee River begins meeting the Gulf of Mexico. That surge meant that the deluge of rainfall Ian dropped had nowhere to go but to flood into homes, and as Ian’s path continued across the state, a similar phenomenon took place in the northeastern region of Florida.

“The rotation of the hurricane is pulling all that storm surge. You have the St. Johns River, some other areas over there that are significant tributaries,” said Coggins. “I think we’re going to see a lot more flood events and flood response.”

Even a week later, some areas only just started to see flood waters start to recede.

In the immediate aftermath of a storm, much of SBDR’s energy focuses on providing mass care feeding for the hundreds of thousands of people without power. Approximately 200,000 people in Lee, Charlotte and Sarasota counties are still waiting for power to be restored, down from 2.5 million across the region at the height of the storm.

Teams with SBDR have already begun assisting homeowners in their recovery efforts, cleaning out mud and debris from flood damaged homes as well as removing downed trees and other debris. As the mass feeding need diminishes, SBDR’s focus will shift entirely to recovery.

“We will stay here as long as, obviously, the need is here and the work orders and the jobs warrant us having a site here,” Coggins said.

After Hurricane Michael hit the Florida panhandle in 2018, Southern Baptists ran a 145-day response. That longevity is made possible by the cooperative spirit the undergirds the ministry of Southern Baptists.

“We talk about the Cooperative Program and usually we talk about it as a funding mechanism,” said Coggins. “Cooperative Program in this regard is not so much about the funding mechanism as it is really about the cooperative nature of what we do as Southern Baptists. This is it in practicality and reality. It’s one thing to send your money to something, it’s another thing to see the result of that in a very practical, experiential way.”

Local churches, like Murdock Baptist, open up their facilities to host teams of volunteers, and one of SBDR’s top priorities is supporting the ministry efforts of those churches to reach their communities.

“They showed up and they have brought help and hope and comfort. They are just doing marvelous work,” said Ron Tipton, pastor of Murdock Baptist. “I believe, probably, the strongest showing—disaster relief teams themselves—are the strongest showing of who we are cooperatively.”

From the national perspective, Send Relief, the joint compassion ministry of the North American Mission Board (NAMB) and the International Mission Board, provides recovery resources and food that SBDR volunteers need to support storm survivors.

Send Relief also provides support that helps SBDR tally their response totals and report them to disaster relief partners, like American Red Cross, The Salvation Army and the state of Florida.

“We’re here to help support the state disaster relief teams, fill in any gaps that they may have in the response. We have multiple ways at the national level to help solve those problems,” said Coy Webb, crisis response director for Send Relief. “We also seek to mobilize the resources they need quickly so that volunteers can get started as soon as they arrive.”

Everything SBDR and Send Relief does to meet needs in the throes of a crisis centers on not only meeting physical needs but extending the invitation to receive eternal, spiritual hope.

“We want to make sure that, first and foremost, that people know why we’re here, who we’re here to represent and why we’re doing what we do to bring them hope in the name of the Lord Jesus,” said Coggins. “That’s always forefront in all of our minds. Pray that our volunteers and our witness across all of our locations would be strong and powerful and visible. Pray for the homeowners and the survivors. These folks have been devastated.”

For updates on FLDR response go to facebook.com/FLBaptistDR and flbaptist.org/dr-current-response. To give financially in support of these relief efforts go to https://flbaptist.org/dr-give/. Donations of items are not needed at this time.