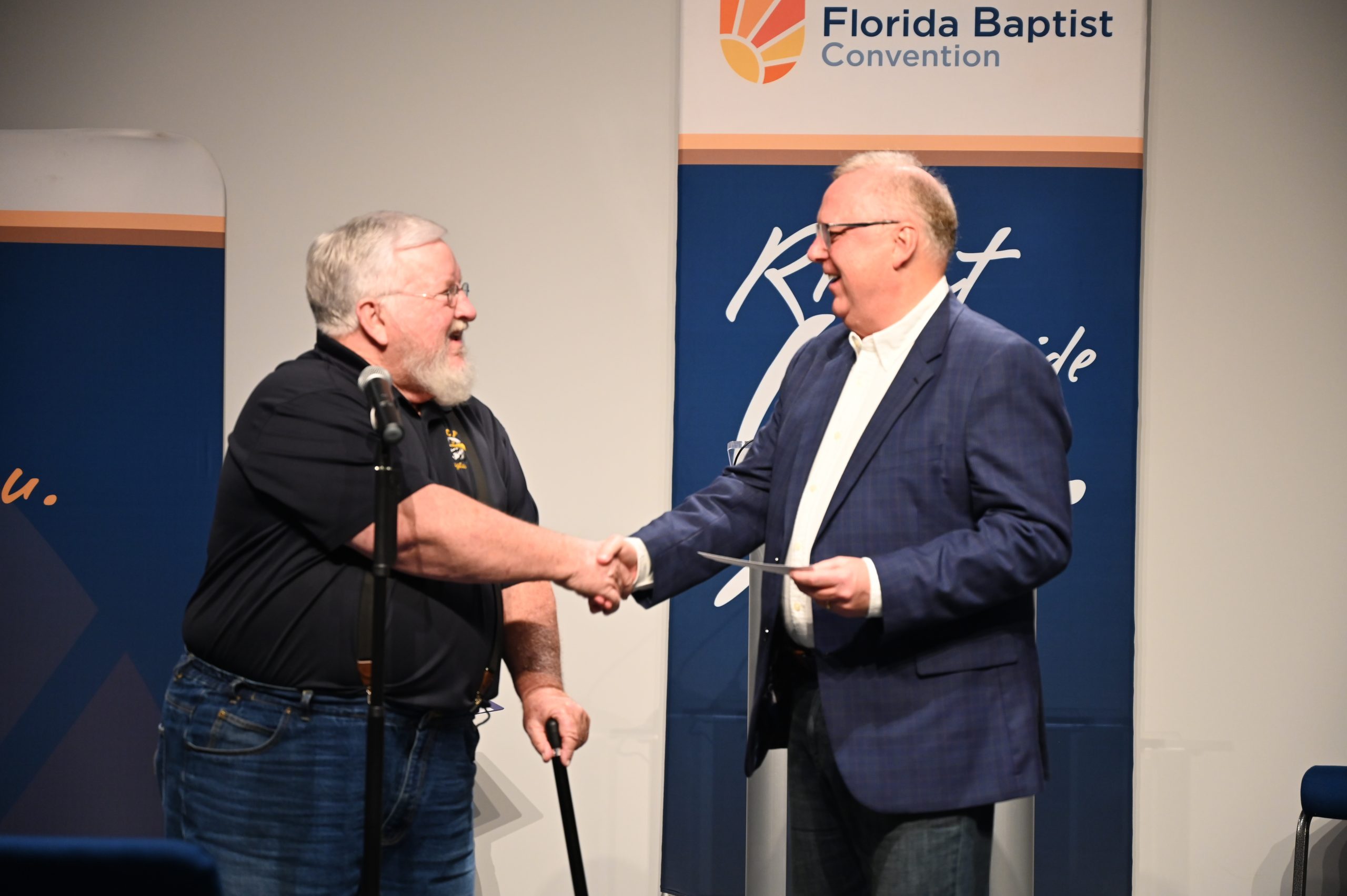 Pictured Above: BCF President Thomas A. Kinchen presents Dr. Tommy Green, Executive Director-Treasurer of the Florida Baptist Convention, a “tithe” check for $35,000 from the $350,000 down payment for the sale of the Blue Springs Conference Center.

GRACEVILLE–During the Sept. 18 meeting of the Florida Baptist Convention’s State Board of Missions, Thomas A. Kinchen, president of The Baptist College of Florida, presented what he termed as a “tithe” check to Tommy Green, Florida Baptists’ executive director-treasurer.

Kinchen announced that the college’s Board of Trustees had approved a gift of $300,000 to the Convention from the $3 million sale price of the Blue Springs Baptist Conference Center property in Marianna. During the meeting, he presented a $35,000 check from the $350,000 down payment the college received.

The Blue Springs property had been given to the college by the Florida convention in 2016. The facility located 28 miles from the school had once been a thriving conference and camping facility for the state convention. But due to a drop in usage and revenue, the convention had sought to sell the property to focus resources on the Lake Yale Conference Center located in the center of the state in Leesburg. But a buyer was never found.

Under BCF’s leadership in its first full year of camp and conference operation, the Blue Springs center showed a profit for the first time in many years.

“The damage to the property made it impossible for the College to bring it back to full operation while carrying out its primary function of educating Christian leaders,” said Kinchen.  At that point, the college began the process of seeking to find a buyer for the property.

“It was always my desire to find a buyer that would operate the property as a Christian camping and conference center,” said Kinchen.

In the summer of 2020, BCF sold the Blue Springs property to Camp Anderson Ministries of Old Town, which owns and operates a Christian camp and conference there on the Suwanee River. Camp Anderson Ministries had been looking for property to expand their growing camping and conference ministry, and the Blue Springs property fit their needs.

At that time, BCF’s trustees excitedly and enthusiastically approved a recommendation to give a tithe—10%–of the total proceeds back to the Convention.

“We would not have had the opportunity to utilize the property without the generosity of the Convention,” said Kinchen. “Therefore, it is only right for one portion of the Florida Baptist family to share with the other parts.”