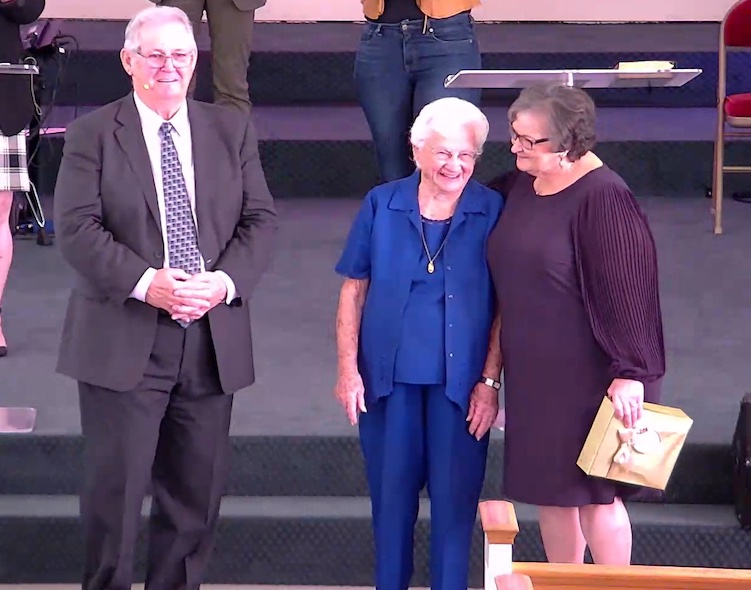 “She is 90 years old and has served as secretary and historian at Immanuel continuously since Oct. 19, 1953,” said Senior Pastor Larry Brister. “That’s right–68 years, which we think may be the longest-term record. At least in the Florida Baptist Convention.”

The bilingual congregation celebrated Naumann during a joint worship service Nov. 21 and gifted her a box of chocolates, her favorite.

Naumann has served as secretary for 10 of the 11 pastors to have led the Immanuel Baptist family. When church’s first pastor, W.C. Sparkman, arrived to lead the church in November 1938, Fort Lauderdale was a small town with a little over 10,000 residents. And even though Naumann did not serve as secretary under his leadership, Sparkman performed her wedding.

“Mrs. Audrey,” as she is affectionately called, said she enjoys working with pastors and helping anyone and everyone who approaches her. 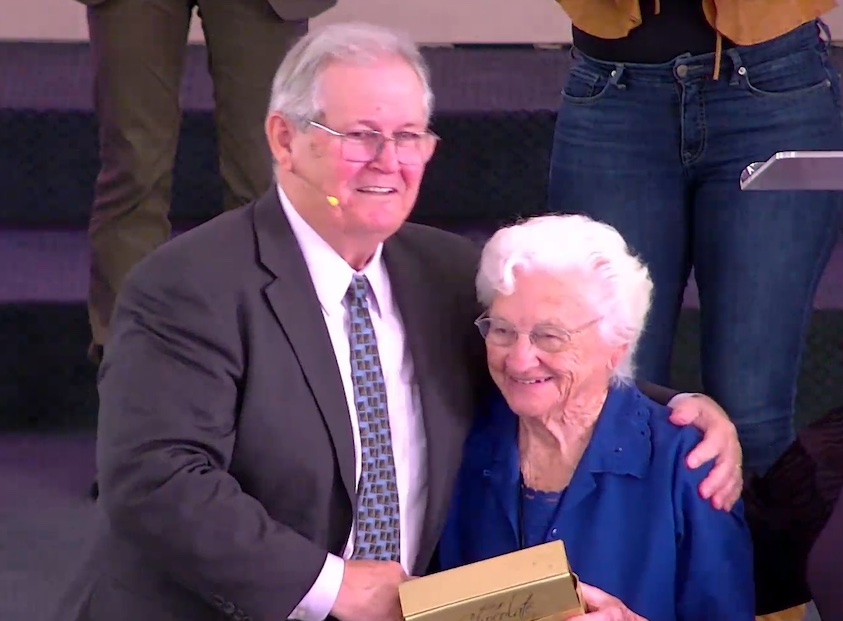 “The greatest moment has been working with pastors. We’ve had great pastors, not just preachers but pastors with a love for people…This is a loving church; we love everybody no matter where they come from,” she said.

Naumann has been blessed with a son and daughter, four grandchildren, and four great-grandchildren.

“She is one of the grandest, kindest, gentlest, and most Godly people I have ever had the pleasure to know, and she is a blessing to anyone that has ever known her,” said Brister. “It is an honor to serve with saints like these,” he said.

Since the senior saint began her ministry at Immanuel, she has kept a record of everything that has happened at every Sunday service since 1948.

“I can ask Mrs. Naumann what happened on any Sunday since 1948 and looking back over her notes she can tell me exactly what went on,” shared Brister.

But keeping records is another one of the joys of the job, she shared. “I just love history,”

Brister made it clear to the congregation that Mrs. Naumann is not retiring but is simply being recognized for her faithfulness to her ministry and her church. “She will be with us as long as she wants.”

Not one to bask in the limelight, Brister said, “She was just appalled at being recognized and I was in ‘big trouble.’”