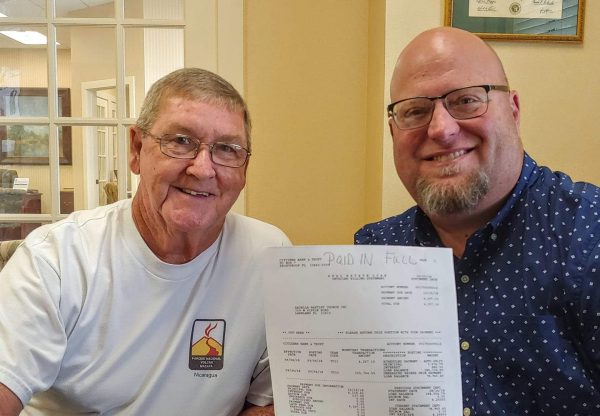 Ardella Baptist saying “yes” to what God has next

Ardella Baptist Church in Lakeland reached an important milestone two months ago by becoming a debt-free church. The 96-year-old church paid off $540,000 in debt on Sept. 25 in what was a two-year journey that began under the leadership of pastor Mark Bedwell.

“I came to the church about two years ago and at the time the church was down to about 100 core families who were struggling to keep the church just above water,” he said.

Every month the church was making a $4,000 payment toward the mortgage on their property, which includes a soccer field and three buildings. Today, that money goes toward being able to serve the community better. For example, the church has wanted to use the soccer field as a community outreach tool for a long time but due to money constraints, they were unable to do so. Now, Bedwell said, they are working toward turning the soccer field into a community park with a walking track, benches, and a children’s play area as a way of attracting families from the community.

Bedwell said that his approach to encouraging the church in their debt-free journey was three-fold; he preached about it, made it part of the church’s vision, and kept the goal in front of the people.

Everyone at Ardella had skin in the debt pay-off game, said Bedwell. “It was a ton of people giving a little not just one rich person coming and paying it all off.” To raise money the church held banquets and sold lunches on Sundays, individuals held yard sales and gave proceeds to the church, and people gave as they were led. On Sept. 25, Bedwell’s birthday, the church was just $80,000 away from paying off the debt. “A couple came and gifted us a check for that amount.”

On Dec. 16 the church will have its annual business meeting and that night they are planning to burn the bank note and the thermometer they have used to visually represent the debt payoff.

“I’ve only been debt-free for two years because I’ve only been pastor here two years but there are folks here who started in the nursery and have been in debt for most of their church life,” said Bedwell. “For them it is a truly joyous moment.”