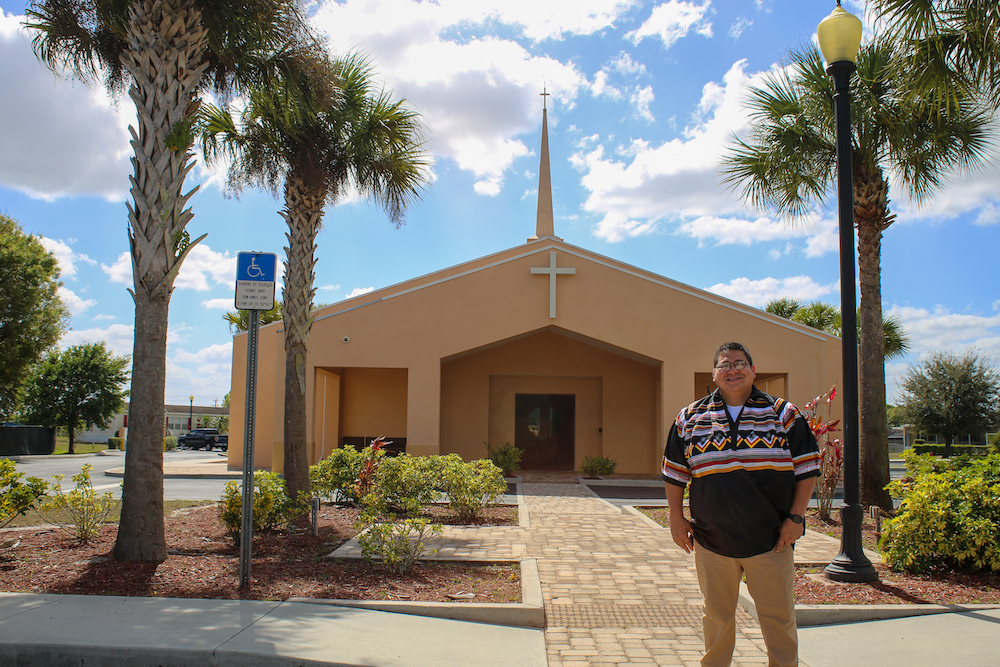 A ministry heart for Native Americans

Pictured Above: Pastor Josh LeadingFox stands outside the sanctuary of Immokalee First Seminole Baptist Church which was dedicated in 2010 on the Immokalee Reservation in southwest Florida.

Josh LeadingFox, pastor of Immokalee First Seminole Baptist Church in southwest Florida, is dedicated to reaching Native Americans living on the Seminole Tribe’s Immokalee Reservation as well as residents in the surrounding community. But his ministry vision is far broader than that.

The church website simply but boldly proclaims: “Every Nation, Every Tribe, Every People, Every Language.”

LeadingFox, who is Pawnee and Otoe, knows firsthand what it’s like to navigate across cultural boundaries. His wife, Lyndsey, is Creek, Seminole and Cherokee. That means their children trace their Native American roots to five tribes.

“Every tribe is different,” LeadingFox noted. “Me being Pawnee, coming to the Seminole Tribe is like going to a different nation because some of their culture is completely different than I’ve learned over the years.”

While “we’re here just to love and share Christ,” LeadingFox acknowledged it was a process to be accepted in the new ministry community after the congregation called him as pastor in 2011. Even amid the tribal differences, however, “there are some doors that are open because we are Native.”

The word “Immokalee” comes from a similar Miccosukee word that means “my home,” LeadingFox noted.

“This is what has become home to us now,” he said. “We needed this community just to show us what living by faith looks like. We’ve stepped out and God has really opened a lot of doors over the years.”

The congregation began in 2010 as a mission of Big Cypress First Baptist Church in the nearby Big Cypress Reservation. The Seminole Tribe of Florida built Immokalee’s church facilities and presented the keys and property debt-free to the congregation. Immokalee First Seminole officially constituted as a church in 2012.

As the congregation marks its 10th anniversary as a freestanding church, LeadingFox said, “What I’ve learned over the years in ministry in the Native American community is you have to establish a relationship first. It takes time to do that because especially the Native community has a lot of guards up just because of trauma of the past and things that have happened in history.

“That’s still a process,” he added. “We’re 11 years into it and there are some that are still ultra-guarded around us and the idea of church. It’s just a battle that the Native community has because there are people that have traditional beliefs and they’re so opposed to church.”

Citing such issues as alcoholism, drug abuse and suicide that are prevalent on many reservations, LeadingFox said, “It’s really just a reflection of the dark world that we live in.

“When you serve in one place for over a decade, you’ll see a lot of ups and downs,” he acknowledged. “One thing that we’ve learned along the way is no matter how high the up goes or how low the down goes, God’s the same. As long as we’re focused on the Lord, I believe He’s the one who’s going to help us in every up and down.”

Serving Native Americans across the U.S.

As a board member for the Fellowship of Native American Christians, LeadingFox is deeply committed to reaching fellow Native Americans with the gospel of Christ.

Leaders of the national ministry organization “have a heart as Native people to help to reach our Native nations because there’s a need there,” LeadingFox explained. “There are so many that are hurting and are seeking hope.”

Others, he admitted, have tragically lost any sense of hope.

Among Native Americans in more than 570 tribes across the country, “less than 10% have an actual, real relationship with Christ,” LeadingFox said. “They’ve never given their life to the Lord for salvation.

While Native Americans make up less than 2% of the U.S. population, according to the 2020 Census, “Native people are still here, they’re still strong, they still have a voice,” LeadingFox insisted. “We may be an insignificant population number-wise, but we’re not insignificant in the eyes of God. He sees every single one of us no matter what our background is.”

Inviting fellow believers to pray for his congregation and ministry, LeadingFox said, “The biggest need that we have is just keeping our eyes on the Lord and serving faithfully.

“Even though we are on a reservation, we try with all our heart to be the Lord’s church and we don’t turn anyone away,” he affirmed. “Anyone that wants to come and worship with us, they are welcome here.”

For Josh LeadingFox and Immokalee First Seminole Baptist Church, that means seeking to reach and serve “Every Nation, Every Tribe, Every People, Every Language” — every day.

The Baptist Paper is a national publication that gives you credible, balanced news you can trust from a Christian worldview. Sent to homes every other week, it cuts through the noise and the bias of the world to give you the original, concise information you need to stay knowledgeable in your daily walk. The Baptist Paper is an uplifting, encouraging resource that gives you a boost of energy, a shot of grace and truth with compassion.