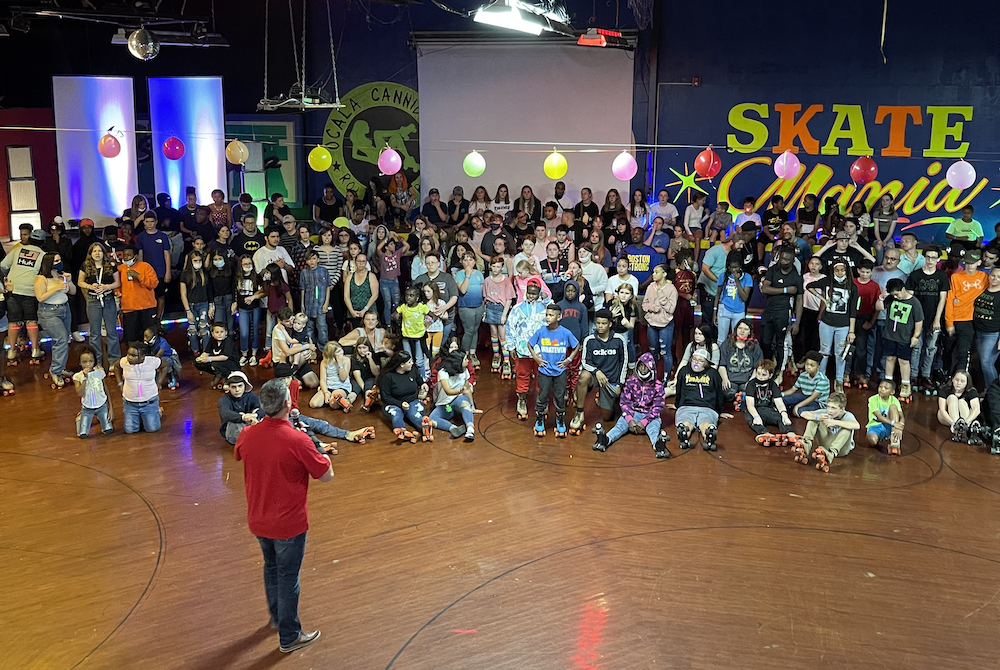 A Church in a Skating Rink? Trulife Church Says Yes

OCALA–A church at a skating rink might sound extreme to some. It’s definitely not what Pastor Mike Kirby originally pictured when he set out to plant a new church in Ocala in late 2019.

In fact, he originally laughed at the idea when his associate pastor suggested it as they met for coffee within sight of Skate Mania on Maricamp Road.

But talk to him today and he’ll tell you it’s the perfect place for a church–roller skates, disco balls, glow lights and all.

TruLife Church started small with a core group on the second floor above a local business. But to grow and be accessible to all, they began looking for a new place. Although he originally laughed at the skating rink idea, something kept impressing on him until he eventually called the owners.

The owners not only welcomed the idea, but they also soon asked Kirby if he could run the skating rink every weekend.

“We’ve been overseeing the skating rink for over a year now,” he said. “We run their skating rink on Friday and Saturday nights, and we’ve been having church there on Sundays. It costs us nothing. I don’t charge them; they don’t charge us. We have full availability of the building.”

Running a business is not new for Kirby. He has years of management experience. But he sees the rink as more of a mission field. And those Friday and Saturday skate nights? Well, he considers those to be his church’s youth nights, with skaters on Saturday night helping set up chairs for church on Sunday.

“What church has a youth group where people pay to attend? These kids are paying $9 to come and skate and we get to love on them and minister to them,” he said. “They all know who Pastor Mike is now and I get to go through there and feel so blessed to high five them and they hug us and tell us all these stories.”

It’s those stories–their heartbreaking stories–that help him see how vital this ministry is. Stories of drug abuse, physical abuse, broken families, parental death, gang violence and so much more.

“When I walk in there on Friday and Saturday and I see these broken kids, it makes it all worth it,” he said. “I don’t think about the work, the struggles or any of that. It’s the greatest peace, the greatest feeling that I could ever have.”

The church began meeting at the rink March 1, 2020. Two weeks later, they had to shut down due to the pandemic. But Kirby says they were one of the first local churches to begin holding services in the parking lot, so they never missed a Sunday. They moved back inside late in the fall.

This Easter they decided to hold services in a nearby park due to COVID concerns and included an Easter Egg hunt for children. They rented 100 chairs and placed 5×5 tarps around to give it a picnic feel. 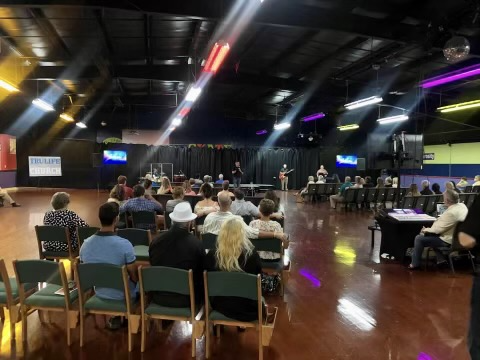 “For a little church that’s running 40 to 50 because of all the stuff we’ve been through, we had over 100 plus people show up that day,” he said. “Through that service we had over nine salvations that Sunday morning. It was amazing. It was definitely a great way to reach the community.”

TruLife also allows skating right after church services and holds special outreach events like the recent GlowNight that brought in more than 350 people during Spring Break.

Another way they are reaching out is through the day care center next to the skating rink. TruLife has begun giving away cups filled with small items and info about the church services to parents. Next is a “Pullup Project,” named for the pullup diapers that many children wear and for the parents who pull up in their cars each day. The plan is to hold a diaper drive at the church and distribute those to parents for free.

While starting a new church can be challenging and costly, Kirby credits the SEND Network Florida partnership between the Florida Baptist Convention and North American Mission Board (NAMB) for making “it possible for us to do so much more than we would have ever done. God has provided for us with great people at church, but this has put us in a different place to be able to do so much more for the community,” he said. “We’ve been blessed.”

Kirby said there are eight people on the leadership team, and they pray together in making decisions about the church. While the church has endured through all the issues brought on by the pandemic, he says they are excited about the days ahead.

“Even though our church is not growing as big as we would like it to be in numbers, we are getting to plant more seeds than most churches can through the skating nights, the glow nights and the day care,” he said.