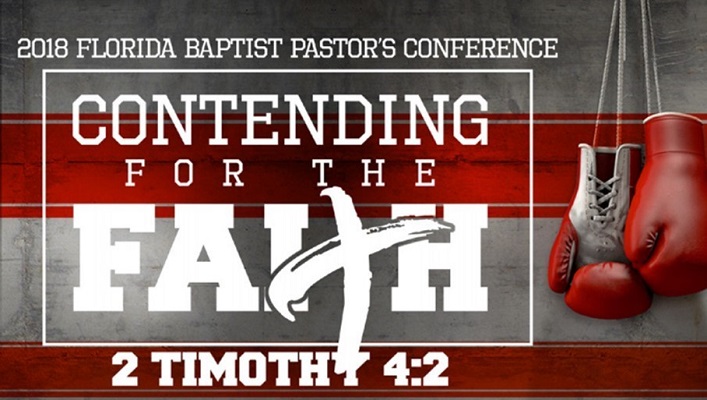 Contending for the Faith

The third session of the 2018 Florida Baptist Pastor’s Conference once again opened with voices joined together in worship before K. Marshall Williams took the platform to encourage the gathered pastors to finish strong. 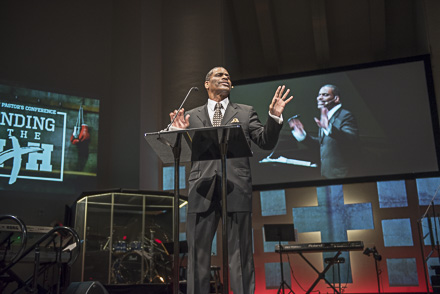 Williams, the pastor of Nazarene Baptist Church in Philadelphia, Pennsylvania, opened by throwing out a simple question: Is anyone struggling?

Williams noted that 70% of pastors say they have no close friends and 80% get discouraged to the point of wanting to quit during their first year of ministry.

“I want to encourage you to hang in there,” Williams told them.

Williams said that ministry is hard and not for the faint of heart but God often brings us to the end of our resources so we can discover His. But part of being able to finish strong is understanding the need to die to self daily and moment by moment. As we live godly lives, we will suffer persecution.

God will meet our needs, Williams told the crowd. Pastors were encouraged to preach the Word and leave the results to God.

“We need to recognize it’s not about us – it’s all about Him,” he said. “God doesn’t forget the right ministry for the right motive.”

Williams said that despite the fact that pastoring is very lonely, pastors are called to hold up under adversity and endure affliction, much like Jesus did.

“How do you expect to look like Jesus and not get a little of what he got?”

Williams ended with a call for racial and ethnic unity because a strong indicator of how much we love God is how we love each other.

Following the spirited and powerful message from Williams, Charlie Dates, pastor of Progressive Baptist Church in 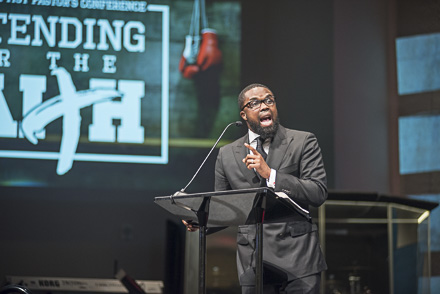 Chicago, Illinois, exhorted pastors to be committed to their two main responsibilities – prayer and preaching.

With the words of Acts 6:4, prayer and preaching become the two pillars of the pastor’s job.

“It is our responsibility to talk to God on behalf of the people and talk to the people on behalf of God,” Dates said. “This text places a priority on prayer – the preaching man has to first be a praying man.”

Dates reminded pastors that prayer will freshen their hearts, energize their spirits, renew their minds and ready their souls for preaching. He also reminded them preaching is a ministry, not a career. Being devoted to the Word speaks to a high commitment to preaching.

Finally Dates left the pastors with a word of encouragement about the power of God to change people: “If you preach the Word, God will do the work – the Word has power.”

Paul Purvis, pastor of Mission Hill Church in Temple Terrace, nominated Brian Stowe, pastor of First Baptist Church in Plant City, for president. Purvis said Stowe has shown great leadership in his church, as he led them through a relocation process in the last year, with 200 people being baptized in the nine months since the relocation took place.

“His desire is to encourage pastors to stay at it – [this is] the reason I respect and recommend him,” Purvis said.

With no other nominations, Stowe was elected president of the 2019 Florida Baptist Pastor’s Conference.

Calvin Carr, pastor of North Central Baptist Church in Gainesville, nominated David Chauncey, pastor of Westside Baptist Church also in Gainesville, for first vice president of the 2019 Pastor’s Conference. Carr said Chauncey has demonstrated his leadership as a member of the State Board of Mission and hosted a Sharper! Conference at his church this year, talking to pastors about developing life changing messages.

“He loves the church and you can see his heart for making disciples in the local church. That is why I wholeheartedly recommend my friend as 1st vice president of the great Florida Baptist Pastor’s Conference,” Carr said.

With no other nominations, Chauncey was elected first vice president of the 2019 Florida Baptist Pastor’s Conference.

Jose Prado, pastor of Christ Family Church in Miami, nominated Louis Egipciaco, pastor of Elevate Church in Miami Lakes, for second vice president of the 2019 Pastor’s Conference. Prado said Egipciaco took a church in decline with a congregation of 20 and through revitalization, the church has grown to 800 people in a period of nine years.

“He’s an encouragement to other pastors in his city and a man of prayer,” Prado said.

With no other nominations, Louis Egipciaco was elected second vice president of the 2019 Florida Baptist Pastor’s Conference. 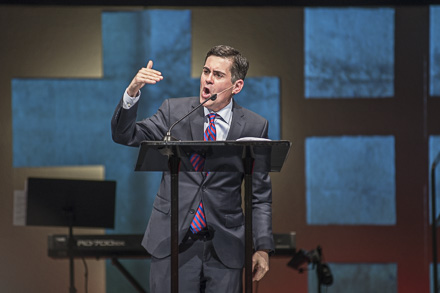 Russell Moore, president of the Ethics and Religious Liberties Commission of the Southern Baptist Convention, closed the Pastor’s Conference preaching out of 1 Kings 19:1-19.

Moore compared Elijah’s time in the wilderness and on Mount Horeb to a pastor’s ministry today. Elijah was battling against worshippers and the priests of Baal; a god that represents power, much like today’s pastors are ministering to a culture that seeks power and self-indulgence.

In the 1 Kings passage Elijah felt alone in being faithful to God. God, however, tells Elijah that he is not alone but that there are another 7,000 who have not bowed nor kissed Baal. “There are decisions you are making right now that make you feel lonely and isolated, God will use it to bring people whose names and faces you don’t know yet [to Himself] …the path to the cross leads to community,” said Moore.

Weakness, said Moore, leads to power. Elijah had to eat and drink and rest to be able to make his journey. “It was God saying you are a creature, not a god, you are someone who needs to be taken care of…In our weakness we see the power of the Gospel of Jesus Christ.”

Finally, Moore told pastors that irrelevance is the path to the future. He encouraged pastors to not be afraid that they are being replaced or that they will become irrelevant. Like Elijah, pastors must invest in the next generation. “Irrelevance [of the individual] is how God continues His legacy.”

For MORE about the State Convention